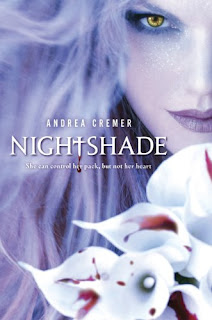 Summary (from Goodreads): Calla Tor has always known her destiny: After graduating from the Mountain School, she'll be the mate of sexy alpha wolf Ren Laroche and fight with him, side by side, ruling their pack and guarding sacred sites for the Keepers.

But when she violates her masters' laws by saving a beautiful human boy out for a hike, Calla begins to question her fate, her existence, and the very essence of the world she has known. By following her heart, she might lose everything— including her own life. Is forbidden love worth the ultimate sacrifice?

My review: Well, I should start by saying that I haven’t scored Nightshade particularly highly but, in part, that’s because I’m not a huge fan of the genre. I think fans of paranormal romance will absolutely adore this one and, judging by the scores and scores of five star reviews on Goodreads, it seems that they do.

Nightshade is well written, the construction is good and I liked the characters but I think the formula for paranormal romances is beginning to wear a little thin. I would love for a paranormal romance to come out and really shock me, the play with the rules and maybe, for once, not end with the star crossed lovers, one werewolf/vampire/mermaid/sandman/angel/pixie (delete as appropriate) and one human living happily ever after. That is, until the sequel!

However, I digress. Nightshade is the story of Calla, a strong teenage girl who harbours a little secret – you guessed it, she’s part wolf. As it says in the summary, she’s destined to become the mate of ‘sexy alpha wolf’ Ren and rule their pack for the rest of the days. All is going to plan until Calla breaks the laws by saving a ‘beautiful human boy’ (they are always beautiful, aren’t they? How about a heroine saving an average looking boy and falling for his personality and sense of humour?) and finds herself questioning everything she had been so sure of before.

Nightshade is a tale of forbidden love and Cremer is great at writing lust-filled, yearning, lingering scenes that will get you a little hot under the collar. Well, they did me anyway. The attraction between Calla and Shay is electric and definitely one of the strong points of this book. I know I keep saying I don’t go for the whole ‘Team’ thing but, for the record, I’m Team Shay. Ren – not so much.

I’m genuinely sorry if I sound like I’m ranting through this review because I promise you I’m not. I just found that 2010 was a year so filled with paranormal romances I’m beginning to grow a little tired of the tried and tested formula. I want something to shake me – alas, Nightshade did not. It stuck firmly to the template and made sure not to deviate.

Andrea Cremer is a great writer but this series just isn't for me. Everything was great but I wasn’t moved, I didn’t feel the need to rush out and bombard my friends with copies. It was good but in a few months’ time I don’t think I’ll remember it.