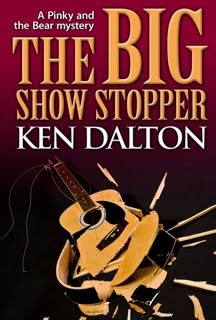 Summary (from Goodreads): The Big Show Stopper opens in a packed concert arena with everyone waiting for the entrance of Brady Blackstone, the richest, and premier concert performer in America. But before Brady sets his foot on the stage, a tragic accident takes his life in front of Bear and a devastated Flo.

However, it does not take Bear and Flo very long to question if the death was it an accident or murder? Once again, in the pursuit of a pile of money and a little justice, Pinky travels to an exotic site while Bear and Flo end up in one of the least desirable locations in California.

The Big Show Stopper brings back Pinky, Bear, Flo, along with a gaggle of quirky characters. A beer swilling wacko. A naked old fart. A couple of downright dangerous folks. And concludes on a dark night with the dynamic trio spread eagle counting down the final seconds of their lives.

My review: I'm normally quite fixed with the genres of books I review (YA and horror, please) but sometimes a book comes along and reminds me that I should expand my horizons every now and then. The Big Show Stopper is such an enjoyable read and, as a mystery, it's not the kind of thing I would normally choose to read at all.

The characters in The Big Show Stopper are instantly likeable and have brilliant chemistry from the outset. I loved the way Pinky and Bear bounced off of each other and had such snappy dialogue, it kept the pace moving throughout the novel and I didn't feel as though any words were wasted.

I'm not an expert on mystery novels but I felt like this was a fresh story and I didn't find it at all predictable, which is something I have felt with other mystery novels I've tried. Every time I thought I knew who the culprit was there would be another clue that would completely throw me off - it was great and I was gripped the whole time.

There is another book in this series that comes before The Big Show Stopper, which is called The Bloody Birthright and I'd definitely be interested in checking this book out too. I do think The Big Show Stopper worked brilliantly as a standalone novel and I wouldn't hesitate this to any fans of the mystery genre. 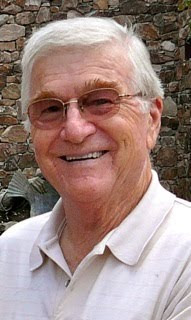 Ken Dalton was born in 1938. In a turn of bad luck, the dreaded Polio virus found Ken. At the end of World War II, Ken's family moved to Cheyenne, Wyoming for a year where he learned how to live through snow blizzards, avoid walking through the large pile of coal in the basement, and how to survive life as an Army Officer's brat on a base called Fort Warren.

By the age of sixteen, after eleven years of operations, therapy, and braces, Ken's luck changed dramatically when he met the girl of his dreams at a party. A few years later they married, produced three wonderful children, and settled into a happy life in Southern California.

In 1966, Ken, who worked as a technician for Pacific Bell, and his family left Southern California for the green hills of Sonoma County where they bought a home in Sebastopol surrounded with apple trees. A few years later, Ken and Arlene built a new home on three and a half acres. They raised cows, pigs, and learned how to build outstanding fences. While their children grew, they hosted two exchange students, Eva Reimers from Sweden, and Tanja Wuttke from Germany, both of whom are still loved members of the Dalton clan. Also during those years, Ken was promoted to management at Pacific Bell. He eventually ended up responsible for all the central offices, sixty-three, in an area that covered five counties.

In 1977, Ken, Arlene, Bob Wiltermood, and his wife Norma, designed, built, and operated a 2000 case winery named Pommeraie Vineyards. They produced award winning Cabernet Sauvignon and Chardonnay. However, after Bob died, the winery was sold. Ken and Arlene moved to a hilltop in Healdsburg.

With the winery gone, and time on their hands, Ken and Arlene started to perform with the Camp Rose Players. Twenty years and forty productions later, both are still acting and singing.

Life was good. All Ken had to do was learn some lines and bow when the audience applauded.

Then, ten years ago, in a moment of madness, Ken started to write. His first article was published in Golf Illustrated in August 1996. More golf articles followed in national and regional magazines including Golf Magazine and Fairways and Greens.

After a two-year stint on the County Grand Jury, Ken felt the need to begin his first novel.

Now, after a decade of struggle to learn the craft of writing, Ken has become the publishing world's latest overnight sensation.
Posted by CarlyB at 07:00