Hi everyone! Today I've got an interview with the fabulous Lauren Beukes to share with you all. Lauren's a South African urban fantasy writer and her latest book, Zoo City, is just great. As you know I'm not a huge fantasy fan but every so often a fantasy book will come along with grab me and this definitely happened with Zoo City. I loved it.

If you are an urban fantasy fan then I'm sure you'll have read either Moxyland or Zoo City but if you haven't yet then go, go, go and grab a copy! I just want to say thanks again to Lauren for agreeing to the interview and giving such brilliant answers and thanks to Angry Robot for making me aware of this fab author. 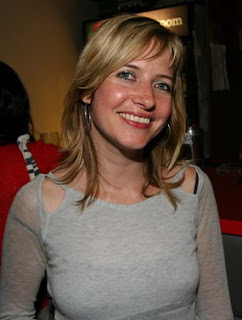 1. In case any readers haven’t read the book yet, can you tell me a little bit about Zoo City?

It’s a noir set in the slumlands of inner city Johannesburg where magic is real and the criminals have symbiotic animal companions that might be guardian angels or the monkey on your back. Part-time email scammer Zinzi has a Sloth on her shoulders and the magical ability to find lost things, but when she gets asked to help find a missing pop star, she’s drawn into a mystery that’s much bigger – and much nastier.

I have a day job as a TV scriptwriter, so I spend a lot of time writing proposals, writing scripts, editing other people’s scripts and I’m currently directing a documentary. At the moment I’m doing most of my writing at night. I try to get 500-1000 words a night. But I also try to take off about three months every year to be able to work on the book full-time. I work best if my husband hides the ADSL modem or if I go work in a café somewhere with no Internet.

3. In young adult fiction in particular, it’s important that readers bond with the characters - what do you think is the most important thing to get right when you're creating a character?

I’m interested in writing real people, who are complicated, who have issues, who don’t always do the right thing or are still trying to figure out what the right thing is, but are still, hopefully, likeable in spite of all that or perhaps because of it. I find earnestly heroic vanilla good guys painfully dull.

4. Can you describe how you felt in the moment when you heard that your first novel had been accepted for publication?

Shock and disbelief and a deep suspicion that it wasn’t real. It took some convincing to persuade me otherwise.

5. I absolutely love the covers for both Zoo City and Moxyland – how much of a say (if any) did you have in their design?

I was incredibly lucky that my publishers Angry Robot and Jacana allowed me a say in choosing the cover designer. Artists John Picacio (US Zoo City) and Joey Hi-Fi (everything else) are insanely talented but also insanely generous in that they let me be part of the process. A lot of authors get no say in the cover design at all.

Having been through it a couple of times now, what’s interesting is that I’ll come to the first meeting / email with specific ideas of what I think will make a great cover. The artists will listen politely, ignore me completely and then come back with something amazing that I couldn’t have imagined, which is really why they’re the artists and I’m just the writer.

They were open to discussing ideas and making tweaks and both used the references I sent them of cell phone camera pics I’d snapped on my recce through Hillbrow and photographs I’d ripped from magazines of people. 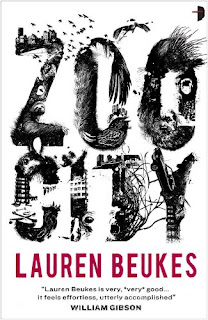 6. What are the three most important things you need to be able to write?

Discipline to face the terror of a blinking cursor waiting for words.

Lonely hermit time behind my keyboard balanced with lots of friends and social time to off-set the cabin fever.

7. Some writers relate take great inspiration from music while they’re writing. Do you listen to music while you’re writing? If so, what artists/bands do you like to listen to while you write?

I like interesting electronica, lush and dark and twisty, but also upbeat. If there are lyrics, it throws me. Amon Tobin, Barry Adamson, Ladytron, Massive Attack as well as South African artists like The Real Estate Agents, 37 MPH, Markus Wormstorm, Sibot, Krushed & Sorted (Who all contributed tracks to the official Moxyland and Zoo City soundtracks from www.africandope.co.za). But if I’m working through a particularly knotty scene, sometimes I have to have dead quiet.

8. Can you tell me a bit about your journey with Zoo City? When did you first come up with the idea and what were the timescales involved between the first draft and the novel being accepted for publication?

I had this image of a girl opening up a closet and pulling on a Sloth like a backpack. I knew it was both a burden and the possibility of redemption. I knew she lived in Hillbrow, that she could find lost things and that she was going to have a run-in with a woman with a stork strapped to her back like angel wings and a dandy with a maltese poodle. So the seedling of the story was already hanging around when Angry Robot signed me on for a two book deal. While Moxyland took four years to write because I messed around a lot inbetween, Zoo City took a year from start to finish because I had a real and looming deadline written in cold ink on a contract.
9. Did Zoo City always have this title or was that something that came later on?

It had another title, but I can’t tell you what it was because it’s spoilerific. Zoo City was a better fit.

Stop mucking around with the first three chapters and finish the book already. Then get feedback from people you trust. Be humble, be open to criticism. Take the advice that works, ignore the advice that doesn’t. Rewrite it. Rewrite it again. Then and only then start looking for an agent and a publisher and get ready to face a lot of rejection. Bounce back from that rejection. Keep trying. Most importantly, keep writing.

Adults shouldn’t be arbiters or taste or subject matter. Teens will read what they like and they should read books that challenge and provoke them.

12. Thank you so much for your time, Lauren. Before you go, could you tell me about any projects you have in the pipeline we can look out for?

I’m working on a new book loosely based on South Africa’s real-life Occult Crimes Unit, directing a documentary called Glitterboys & Ganglands about South Africa’s biggest female impersonation beauty pageant and I have three short stories due as of last week. And about four new novel ideas simmering quietly on the backburner. 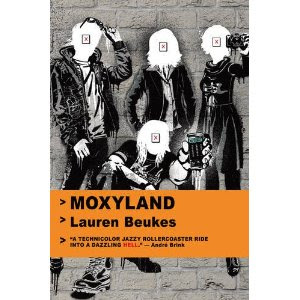