Hello everybody! Today I have a brilliant interview with the lovely Sophia Bennett about the third book in her Threads series, Sequins, Stars and Spotlights. I'm absolutely obsessed with the Threads series (my review of Threads over at Chicklish was one of my first ever!) and I'm going to read Sequins, Stars and Spotlights verrry slowly and savour every word for maximum enjoyment :).

Anyway, aside from loving reading and writing I'm a massive music junkie so I thought I'd write a music themed interview for Sophia. Sadly there are no Girls Aloud references as promised but I hope you enjoy it! 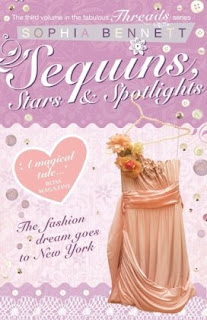 1. Some writers relate take great inspiration from music while they’re writing. Do you listen to music while you’re writing/plotting? If so, what artists/bands do you like to listen to while you write?

I do listen! I write a lot in my local libraries and coffee shops, and I need music to block out some of the background noise. It also helps me get in the sort of upbeat mood I need to be in to keep up with my characters. Zero 7 is the best for this. You wouldn’t think so, to listen to them, but I find their music uplifting. Morcheeba’s good too. Maybe my spiritual home is actually a beach in Ibiza.

I have a different playlist for each book, and some songs I play over and over. I get to know them so well I hardly notice them as I write. The theme tune for Threads was Warm Sound by Zero 7. For Beads Boys & Bangles it was Aaj Ki Raat by Alisha Chinoy, from Slumdog Millionaire. For Sequins Stars & Spotlights it was Empire State of Mind by Alicia Keys.

I also have songs from the eighties onwards that I’ve loved. Talk Talk, Peter Gabriel, Grace Jones, The Killers … Not necessarily my favourite artists and bands, but people whose music is danceable to without being too distracting.

2. What theme tunes would you assign Nonie, Jenny, Edie and Crow and why have you made these choices?
Goodness! Tricky. I haven’t thought about this before.

Nonie’s the hardest one to pick a theme tune for, because I feel so close to her I could think of a hundred tunes she’d love, but none that sums her up. She’s bright, optimistic, loyal, imaginative, uncertain, creative and very slightly crazy. In the end, I think I’ll go for ‘She’s Electric’, by Oasis, because I remember their wild Kensington days (or thereabouts), and it sums up Nonie’s energy pretty well.

Jenny is really into musicals. She was discovered as an actress playing Annie at school, so I think ‘Tomorrow’ from Annie would be good for her. It’s a belter of a song, and she’s a belter of a singer. And it’s relentlessly optimistic. Jenny isn’t always so cheery, but she never gives up.

I like the idea of Ellie Goulding’s ‘I’ll hold my breath’ for Edie. Ellie’s fragile, powerful voice suits Edie and I imagine her looking a bit like Ellie too, with lots of blonde hair and a delicate face. Also, something wonderful and unexpected is going to happen to Edie. She’s holding her breath, but she doesn’t know it until almost the very end. But of course I’ll always think of Edie, too, whenever I hear Tears For Fears’ ‘Everybody Wants To Save The World.’

Crow must have a song by Nina Simone. Nina has the brilliance and the slightly scary stillness of Crow. And her jazz is inspired and timeless – just like Crow’s clothes will be. I shall give her ‘Feeling Good’, because, even when she looks grumpy and alone, she’s usually designing something fabulous in her head, and actually, she’s happier than you’d ever know.

3. Is music an important part of your life? If so, who are some of your favourite bands/artists?

Music is very important to me, because dancing is essential. I don’t do it as often as I’d like to in person, but a bit like Crow and designing, I do it in my head all the time.

I love jazzy, funky music and clever, witty lyrics. If a band can combine the two, I’m a very happy girl, which is why Ian Dury and the Blockheads are my favourite band ever. And Hit Me With Your Rhythm Stick is probably my favourite song.

I love MC Solaar from my Paris days, and Pino Daniele from Italy. Prince is a huge favourite. So are the Police. I went to a concert of theirs a couple of years ago and realized I remembered every word to every song. We all did. There were tens of thousands of us at Twickenham, singing along. It was very special. My uncles got me into 1970s California rock, so I also know all the words to most Steely Dan songs (look ‘em up, folks).

Right now, Muse and Beyonce are among my favourites. Kind of eclectic. Not very ‘out there’, I know. Barry, my publisher, is. He recently introduced me to the Swedish jazz trio EST. Anyone who knows his way around Swedish jazz has to be worth listening to.
4. Do you have a particular song that you think best sums up the Threads series?

This feels easier than finding songs for the girls. For its title, I think West End Girls by the Pet Shop Boys is the best. For its theme, probably Vogue, by Madonna. For its sense of solidarity, We Are Family, by Sister Sledge. My girls stick together, no matter what.

5. Nonie’s older brother, Harry, is a DJ - if you decided to stop writing books and take up a stint behind the decks, what would your DJ name be?

I LOVE THIS QUESTION! I thought it would be really difficult to answer, because even though I often wonder what I’d call a boat, or a horse, or a puppy, I’ve never wondered about my DJ name before. However, it came to me instantly. I’d be Yaya B. When I was about seven, my little brother called me Yaya because he couldn’t say Sophia. And B for my husband, Mr Bennett, who’s my The One.

6. Do you play any instruments or have any musical talents you can wow us with?
Does grade 5 piano count? I am, however, not a bad Ceroc dancer, and I once danced the quickstep for my university (although personally I preferred the more sultry rumba). And I came second in a school talent competition dancing to Abba’s Dancing Queen.

It’s a bit sad, though. At my wedding reception my husband played guitar, with my brother on bass, my father on the drums and my new brother-in-law on vocals. Their Arctic Monkeys covers were amazing. It’s a musically talented family – but mostly I’m out front, dancing.

7. Karaoke - some people love it, some people want to curl up in the foetal position at the mere thought of it. Where do you stand on the matter and what would your number one karaoke song be?
I wasn’t sure until I tried it. We sang ‘I Will Survive’ (as you do) and I discovered that it’s wonderful, as long as you have at least two friends beside you. I was wearing a kimono at the time, which might be why Nonie is wearing one in the opening scene of the new book.

8. What’s your earliest memory of a song really punching you in the gut and making you feel something?
Start! by The Jam. Had to have it. Went out. Bought it. Played it over and over and over. In the book I’m writing at the moment, music features more heavily because the girls form an a cappella band. It’s mostly punk and New Wave. I included Start! and it was fantastic to describe what I loved about it. I called it happy/angry – and that’s how growing up often felt to me.
9. What do you think it is about music that makes it so powerful for teenagers?

First of all, the lyrics of a great song sum up the intense emotions you’re going through and let you know you’re not alone, while at the same time confirming you are alone, because only you can possibly get them as deeply as you do.

Second, the melodies are a wonderful bonding experience. You and your friends know the same tunes. You can sway in time. They’re a good way of finding out who are your kindred spirits: who’s moved by the same things as you.

Third, if you make music, by being in a band, that’s your social and – ahem – romantic life sorted.

10. Finally, who is your musical guilty pleasure?
It’s probably Abba. I refer you to that talent competition I came second in … But also, I happen to know all the words to the Phineas and Ferb songs, because all my children love them and we have them in the car. I’m not sure if they count as a guilty pleasure, though, because they are quite frankly brilliant.