Just a quick one to say I may not be around as much as usual next week and I might not be posting quite as often as normal. I've got the last couple of chapters of my novel to write so I'm going to try and get them done by next weekend so I can start with some hardcore rewrites, hooray!

I know I don't ever talk about my writing here but I think that's going to change. I never really talk much about myself on my blog, I figured people were more interested in hearing about books rather than me but I think I might start doing a few more personal posts.

So, my writing... One day I might write a full post about my writing but for now I'll just say that I'm almost done with the novel I've been working on since last November. Well, I say 'almost done' but that doesn't account for the HUGE amount of rewriting and extra research I have to do. Anyway, it'll be pretty bloody exciting to get the last few lines down so I'm going to try my best to be finished by next Friday. Wish me luck!

The other reason I won't be around too much in the next week is because I'll be puppy-watching full time. Bertie has just been de-balled (he's still pissed off with us) so he has to wear a cone (HAHA) 24 hours a day, for ten days. He's very sad about this and is prone to knocking everything onto the floor because of said cone. So I have to keep an eye on him to make sure he doesn't create more mischief than usual. CUTE. 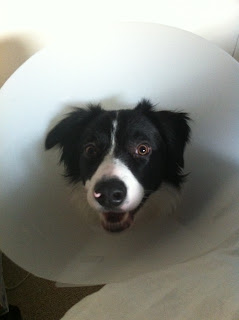 I've scheduled posts and reviews to go up every day next week so things will be running as normal, I just won't be commenting or spending as much time on the Internet - probably good for me to take a bit of a break! So, I may catch you guys on Twitter, if not I'll speak to you all in a week or so!xxx
Posted by CarlyB at 20:48