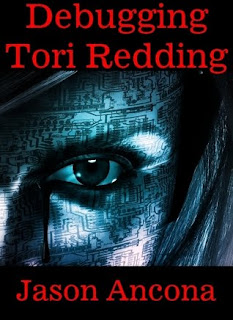 Summary (from Goodreads): Fed up with her peers and their loose morals, Tori starts a new school program, the Not So Fast club, a group dedicated to keeping teens from doing everything they want to do--drink, have sex, and rush to grow up.

A severe toothache interrupts her plan, sending her to the dentist, where she's given an emergency root canal. During the surgery, she's electrocuted and ends up blacking out. When she awakes, her brain has the ability to function like a computer.

Tori uses her new skills and aggressive personality to charge up the club.
Hated by the entire school, she discovers that NSF now stands for: Narcs Suck Farts. Game on. Tori memorizes every school rule, issuing tickets for every little infraction.

After a serious crime occurs, Tori must use her talents to save a life, all while trying to free herself from her mind.

My review: Oh, isn't it so disappointing when a book you're really excited about leaves you with a distinct 'meh' feeling upon finishing it? Sadly, 'meh' (plus a shoulder shrug) is exactly how I felt about Debugging Tori Redding, despite being initially excited to read it. The premise sounded interesting and I'd heard great things about Ancona's writing so I was really keen on this one. It's a little outside my comfort zone so I thought I'd stretch my wings and try something I usually wouldn't.

I should mention before I begin my grumbles that I do seem to be on my own with my opinion and all of the reviews on Goodreads are three or four starred. However, it just didn't work for me, not this time. I have heard many good things about Ancona's other book (Covert Youth Agency) so may well give that a go in the future.

So, what did I think? Well, for starters I coudn't stand Tori. For me, she came across as so judgemental of her peers that it was impossible to warm to her. The book opens with a class discussion of Catcher in the Rye, which escalates into an argument that ends with Tori calling one of the school cheerleaders a slut. Nice. Also, where did this generalisation come from that all cheerleaders in YA novels must be whores? I don't like it and I think it's getting to be a lazy cliche. I used to be a cheerleader, BY THE WAY.

Anyway, I digress. Tori continually preaches that the girls in her class are sluts and the guys are interested in nothing but drinking and sex. So? Live and let live. For me it just felt like Tori was on a crusade to bring everybody down. Sure, some teens do have reckless sex and drink too much but that's their choice, surely. It just felt a little uncomfortable that our protagonist seemed to be condemning everybody around her for not living their lives the way she deems appropriate.

I don't know, it just didn't gel well with me. Maybe I would have liked it more if Tori had been funny or sweet about it but it just seemed as though she was an angry girl who wanted her voice to be heard, whether her opinions were right or wrong. It also didn't seem like she had anything to actually back up what she was campaigning against with the NSF Club - she wanted to start the club to stop teens 'growing up too fast' but there was absolutely no evidence at any stage that 'growing up too fast' was doing anybody in the book any harm at all. In fact, everybody in Debugging Tori Redding seemed quite happy, except Tori herself.

I had a few issues with the writing and structure of the novel as well. From a structural point of view I wish the story had flowed a bit better. It seemed like every event in the novel was put in purely to get the story on to the next stage, if that makes sense. The whole 'toothache' episode just felt so forced to me - Tori was fine one moment, then had a random tooth pain and immediately had to get to the dentist. Of course all of this was in order for her to obtain her super powers but it just seemed plonked in there to move the story forwards, rather than fitting in with the natural flow of things.

I couldn't take to the writing style either. I think it's probably down to personal taste (so again it's probably just me, rather than there actually being an issue with the author's writing skills) but the narrative just didn't seem at all natural to me. Plus, I'm a big fan of showing not telling, which I think was another issue with the writing. My case in point (taken from page 24 of the Kindle copy):

'"If you don't believe me, kiss me right now." Geo looks over at her, waiting for her reaction. "I believe you," Tori says. She wonders if Geo is trying to make a point or if he's using this conversation so he can kiss her because he really wants to. She hopes he's just making a point, as he's her best friend and he {sic} doesn't see him in an amorous way."

Wow, looks like I found a typo there as well. I found that section just a little bit cringeworthy, I have to say. Well, maybe I'm being too harsh. There were some comical elements to the story and I did like the relationship between Geo and Tori but, all in all, this one really didn't do it for me. Sorry guys.