Review: Diary of a Chav: The Fame Diaries - Grace Dent 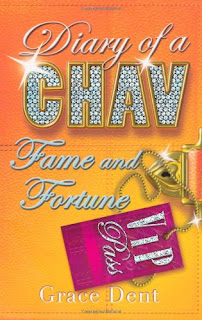 Published: October 16th 2008, Hodder Children’s Books
Pages: 283 pages, paperback
Series?: Yes, this is book five and there are six in the series
Acquired: Purchased myself

Summary (from Goodreads): After the nightmare that was Ibiza, Shiraz is overjoyed to be home in Goodmayes, back with her family, her friends...and Wesley of course. Wes and Sooz are finished and it's not long before he's a regular fixture round at 34 Thundersley Road - much to Diane Wood's delight.

But Shiraz knows herself...and she knows that there's a big wide world out there, just waiting for the unique charms of SBW. Soon she's writing off for college applications and spending the rest of her time trailing after Carrie Draper, who's hellbent on infiltrating the celebrity circuit.

Things get tricky when Shiraz ends up getting a job as PA to a Premier league footballer and his wife - Carrie had her heart set on it and she's furious, but how could Shiraz turn it down? She's not long into the job before Shizza realises that this celebrity lark isn't all it's cracked up to be...And at the end of the day, she really, really wants to be a writer. But what about Wesley? Can she really leave him behind for good?

My review: I’ve said it four times so far and I’ll say it again, I am absolutely in love with this series. Shiraz Bailey Wood is by far one of the most memorable characters I’ve come across in a long, long time and I’m so sad that there’s only one book in the series after this one. I really don’t want it to end!

In The Fame Diaries we see loyal Shiraz accompany her best friend Carrie to a variety of auditions for various reality TV shows. Carrie’s determined to become famous at any cost but Shiraz finds herself feeling more and more uncomfortable about the world Carrie so desperately wants to be a part of.

After an audition to be a part of a Next Top Model style show goes horribly awry, Shiraz tries to convince Carrie that she doesn’t need to be famous to feel beautiful and I think this is a bit of a turning point for Shiraz. We really see her grow up in The Fame Diaries and it was lovely to see her develop like this. She’s grown so much from the Shiraz we saw in the first book and even Carrie managed to grow up a little, at last.

I won’t reveal too much about the plot for fear of any spoilers but I will confirm that the on-off relationship we know and love between Shiraz and Wesley is as complex and frustrating as ever. Will they, won’t they? Who knows!

My only disappointment is that we didn’t see much of Uma in this instalment – fingers crossed she’s more prominent in the last book!

First line: ‘I’m not usually made up on being the centre of attention.’