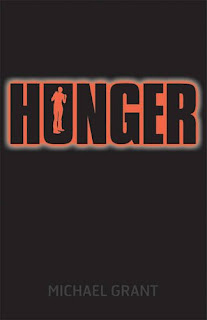 Published: May 15th 2009, Egmont
Pages: 586 pages, paperback
Series?: Yes, this is the second installment
Acquired: Sent for review by the publisher

Summary (from Goodreads): It's been three months since everyone under the age of fifteen became trapped in the bubble known as the FAYZ. Things have only gotten worse. Food is running out, and each day more kids are developing supernatural abilities. Soon tension rises between those with powers and those without, and when an unspeakable tragedy occurs, chaos erupts. It's the normals against the mutants, and the battle promises to turn bloody.

But something more dangerous lurks. A sinister creature known as the Darkness has begun to call to the survivors in the FAYZ. It needs their powers to sustain its own. When the Darkness calls, someone will answer -- with deadly results.

My review: So I was a huge fan of Gone, the first book in this series. You can read my review here. I am always a bit sceptical about the second instalment in any series, as I do often find it to be the weakest, especially if the first book is brilliant (like Gone). However, I adored Hunger and think it’s possibly even stronger than Gone, which is a pretty hefty claim.

We meet a whole host of new characters in Hunger and get to know a lot more about our old favourites from Gone. Many of them are coming to terms with their supernatural abilities, which was an element I loved. They reacted to the unknown in exactly the same way we all would and it made them all seem so human, even though their abilities are anything but.

Sam, the natural but reluctant leader of the FAYZ definitely shows a new side to himself. It’s arguably a more mature side so it was interesting to see his character develop and I think the frustration he showed in Hunger made him much more real to read about. Personally I would have liked to have seen a little more of Astrid in Hunger, as I really grew to like her in Gone but hopefully she’ll get a little more page time in Lies (which I’m just about to read).

Our favourite villains are back with vengeance as well and it was good to see creepy Drake doing what he does best – scaring the hell out of me. That boy is a certifiable psycho but he makes brilliant reading, that’s for sure.

There’s a lot more tension in Hunger and the stakes are constantly upped so there’s everything to play for. We see a lot more ‘Lord of the Flies’ style behaviour in this instalment, when the ‘normal’ kids (without powers) rise up against those with powers and attempt to take over the FAYZ.

I don’t want to give too much away as there are so many twists and turns in Hunger that I think it’s best to go in blind but it’s definitely even stronger than Gone so fans of the series are sure to be satisfied. Now, I can’t wait to get started on Lies!

First line: ‘Sam Temple was on his board.’ 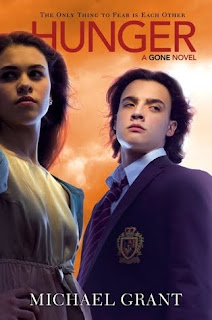