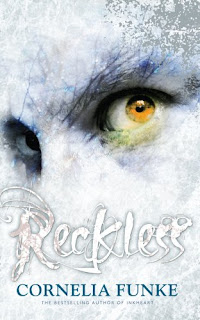 Summary (from Goodreads): For years, Jacob Reckless has been secretly disappearing to another world, a world behind a mirror, a world for which his father abandoned his family. The mirror world is Jacob's escape from reality. It's a place for treasure hunts and magnificent quests. A world where witches haunt the forests and giants and dwarfs roam. A world locked in a deadly war.

Jacob's secret seems safe, until one day his younger brother Will follows him, with disastrous consequences. Faced with a curse that is quickly turning Will to stone, the Reckless brothers are thrust into a race against time to find a cure before Will is lost forever.

Inspired by the Brothers Grimm, master storyteller Cornelia Funke introduces a lush, enchanting world where fantasy meets reality. Reckless is a thrilling adventure, a tale of heroism and loyalty, filled with danger, mystery, and magic--with fairy tales and legends re-imagined as never before.

My review: It’s been a long time since I read a book that began with the traditional line ‘Once upon a time’ and it was like coming home to an old friend. Inspired by fairy stories, Cornelia Funke takes us on an amazing adventure to another world and I challenge anyone to read it and not be instantly drawn into the wonderful world Funke creates.

The world building in Reckless is absolutely fantastic. We get glimpses of the fairy stories we know and love and are introduced to so many incredible characters. The Goyl were brilliant and I really hope we see more of them in the second book in the series, Restless.

My only slight quibble is that I found it difficult to warm to both Jacob and Will. Jacob was a little lacklustre and stereotypical of protagonists in YA fantasy – the typical shining hero. He’s not a character I think I’ll remember and neither was Will, who I found it difficult to warm to. To be honest I think the secondary characters are much more interesting than the Reckless brothers.

I’m a big fan of YA with dark undertones and Reckless definitely delivers a whole dollop of creepiness. Fans of the macabre will be delighted and I was certainly unsettled, which is something I love. It shows that the book made an impact on me and I wouldn’t hesitate to recommend Reckless to any YA reader.

First line: ‘The night breathed through the apartment like a dark animal.’ 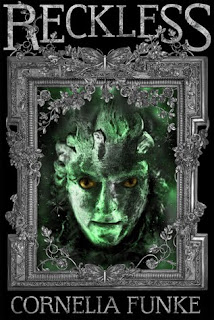