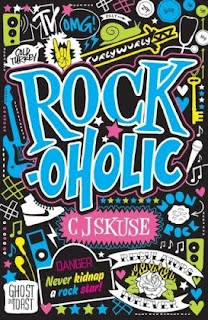 Summary (from Goodreads): Jody loves Jackson Gatlin. At his only UK rock concert, she’s right at the front. But when she's caught in the crush and carried back stage she has more than concussion to contend with. Throw in a menacing manager, a super-wired super-star, and a curly-wurly, and she finds herself taking home more than just a poster. It’s the accidental kidnapping of the decade. But what happens if you’ve a rock-god in your garage who doesn’t want to leave? Jody’s stuck between a rock-idol and a hard place!

My review: I am in love with this book. It makes me smile, just looking at the cover. I read it last night on the way back from a Simon and Schuster event in London (which was awesome, by the way). Even though it was late at night, I was tired, hot and crushed against the window by the girl next to me (who was drinking gin - GIN, the one alcoholic beverage that makes me retch at the mere smell) I couldn't help but grin the whole way home.

Jodi is our heroine in Rockholic and she's so easy to relate to. She doesn't quite fit in, can't help but get herself into scrapes every now and then (especially after a glass of wine or two) and has a soft spot for the lead singer of her favourite band. We've all been there, right? Well, in her signature style Jodi has to take it one step further by accidentally kidnapping said rock star and stashing him in her garage. Genius. If only I'd thought of it sooner I could have ended up with Johnny Rzeznik in my spare room. Bliss.

Jackson is every rock star you've ever swooned after rolled into one drug addled, arrogant hunk of a man that you can't help but pine after, even when he's trying to fling himself into the River Severn. He was great. I love that he was a bit of a dick (for want of a better word) and I was really hoping Skuse didn't make him so perfect it was unrealistic. Thankfully, she got his
character spot on.

Rockoholic is a modern novel and it's perfect for today's teens - we have references to bands, celebrities, magazines and films so there are enough references to satisfy any pop culture junkie (brilliant, brilliant music taste by the way!). Another thing I personally loved was that the book is set in my neck of the woods for a change. It was great to actually know the shops, roads and landmarks mentioned in the book and Skuse did a great job at bringing Bristol to life in the scenes it's mentioned in. Hooray for the Westcountry.

I really recommend Rockoholic, even if it's not normally your kind of thing. I've read so many intense, emotional books lately that I was desperate for something fun and a little bit fluffy that I could kick back and relax while reading. Rockoholic is perfect to get you through a grey February afternoon and I promise you'll love it.

Lastly, I won't give anything away here but the last line is absolute perfection! And it made me cry. Naturally.

First line: 'To our local newspaper, my grandad's death was 'a shocking accident that brought Bristol city centre to a standstill.'

Goodreads page
Posted by CarlyB at 07:30