Hello everybody! Today I've got a character interview with Tamra from the fab Firelight by Sophie Jordan. I don't know about you guys but I definitely thought Tamra was one of the most interesting characters in the story so it was great to get a little insight into her personality beyond what we see in the book.

Without further ado, I'll hand over to Tamra: 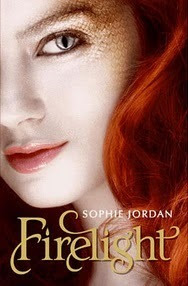 1. Who would play you in a movie of your life?

Me? I never imagined such a thing. No one usually looks at me. I’m there, in the room, but they never see me... it would be nice for someone to play me that really stands out and shines (for a change). Maybe AnnaSophia Robb. She’s lovely, and there’s an energy about her that draws you in.

2. What theme song would you choose to describe your relationship with your sister, Jacinda?

3. Where do you see yourself in five years time? Ten years?

Hopefully, far away from the pride. I want to live in a city. I’ll be a college graduate. Maybe have a boyfriend, and later, a husband. I want a career. Something I’m good at ... something I can feel accomplished doing. That would be nice for a change. To be accomplished at something and for people to recognize that. A really nice change. Of course, I still want Jacinda in my life, too ... I just don’t know if that’s possible in this vision of my future.
4. What's the best thing about being a twin? How about the worst thing?

It was nice growing up and always having a sister that was my best friend, who knew me as well as I knew myself. Sometimes I think she knew me even better. Only when that closeness fades, when we drift apart for reasons neither one of us can control, it hurts. It hurts a lot.
5. What would you say to address claims that you can be manipulative and self centred? Is there any truth to the rumours or are you simply misunderstood?
I guess I’m self-centered. But aren’t we all? I want to follow my dreams like everyone else. Only for me to follow my dreams, means Jacinda can’t follow hers. I hate that, but what am I supposed to do? Quit on myself? Return to the pride where I’m invisible? Or worse than invisible. Where I’m worthless. Something broken and disgusting. Girls don’t want to be my friend. And boys don’t want me. Period. All I can say is: try taking a walk in my shoes and see how much you like it.

Thanks for stopping by, Sophie! So, have any of you read Firelight? Has your opinion of Tamra changed at all after reading her answers?

Make sure you check out tomorrow's stop on the tour, where Sophie will be visiting Leanna over at Daisy Chain Book Reviews to discuss her dream movie cast!
Posted by CarlyB at 08:00