So Meg Cabot, overlord of YA fiction, has a new book coming out in April 2011 - Abandon. It's the first in a trilogy and sounds really fascinating, a little different from what she normally writes but I'm really excited about it.

I've got a trailer (below) to share with you all and for an exlusive sneak peak visit Meg's website - after reading the excerpt from the book I'm even more excited about Abandon's release. Yay for Meg Cabot. Will she ever released anything that isn't perfect? I doubt it.

Seventeen-year-old Pierce knows what happens to us when we die. That's how she met John Hayden, the mysterious stranger who's made returning to normal life—or at least life as Pierce knew it before the accident—next to impossible. Though she thought she escaped him—starting a new school in a whole new place—it turns out she was wrong. He finds her.

What does John want from her? Pierce thinks she knows... just like she knows he's no guardian angel, and his dark world isn't exactly heaven. But she can't stay away from him, either, especially since he's always there when she least expects it, but exactly when she needs him most. But if she lets herself fall any further, she might find herself back in the place she fears the most.

And when Pierce discovers the shocking truth, that’s exactly where John sweeps her: The Underworld. 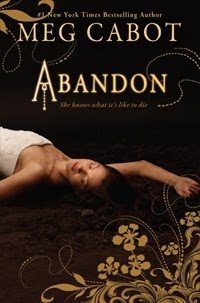