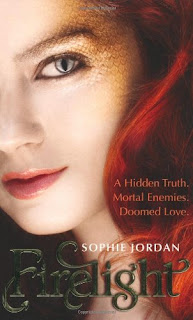 Summary (from Goodreads): Marked as special at an early age, Jacinda knows her every move is watched. But she longs for freedom to make her own choices. When she breaks the most sacred tenet among her kind, she nearly pays with her life. Until a beautiful stranger saves her. A stranger who was sent to hunt those like her. For Jacinda is a draki—a descendant of dragons whose greatest defense is her secret ability to shift into human form.

Forced to flee into the mortal world with her family, Jacinda struggles to adapt to her new surroundings. The only bright light is Will. Gorgeous, elusive Will who stirs her inner draki to life. Although she is irresistibly drawn to him, Jacinda knows Will's dark secret: He and his family are hunters. She should avoid him at all costs. But her inner draki is slowly slipping away—if it dies she will be left as a human forever. She'll do anything to prevent that. Even if it means getting closer to her most dangerous enemy.

My review: Firelight is the first in a new paranormal YA series that I promise will grip you from the outset. The opening scene of Firelight is memorable (to say the least) and the ending will leave you desperate for more. Vanish, the second in the series, comes out later this year and I guarantee leagues of paranormal fans will be counting down the days to find out what happens to Jacinda and co.

Something I found interesting about Firelight is that I didn't particularly bond with any of the characters - none of them are very likeable and all are very much flawed, though that's what I think helps to make them realistic. It was difficult at times to feel invested in a story where I didn't care for the characters but the writing was so beautiful I couldn't stop reading.

The pride dynamic in Firelight was fascinating to read about and I loved learning more about the relationships between different characters - especially twin sisters, Jacina and Tamra. Now, I think Tamra gets a lot of bad press in numerous reviews I've read of Firelight but something about her charmed me. Sure, she's certainly not the most likeable girl by any stretch of the imagination but, for me, she was one of the most realistic characters in the story.

My only real problem with Firelight is that I just felt it was more of the same. I think the paranormal market is so overly saturated at the moment that nothing feels like a fresh story any more. Whether it's werewolves, vampires, fairies or, in this case, dragons - from page one I can guess pretty much the entire story, which is a shame as I like being shocked. The only real surprise in Firelight was the ending, which I have to admit I didn't see coming at all.

If you're already a paranormal fan I'm sure you'll really love Firelight and if not, well, I'm not convinced that it will rock your world, though it is an interesting and well-written read.

First line: 'Gazing out at the quiet lake, I know the risk is worth it.'