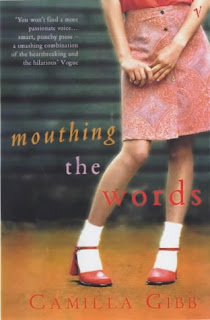 Summary (from Goodreads): By turns harrowing and hilarious, Thelma's story follows her bumpy progress from the rural English village of Little Slaughter to Canada to a law degree at Oxford. Along the way she encounters many potential parents and even makes some friends, but it is with the companions of her fertile imagination - with the scaredy-baby Janawee, moody and timid Ginniger, and big, strong, stoic Heroin - that Thelma escapes, and at the same time complicates, her life's crueler realities.

The shadows they cast cannot dull Thelma's humor or spirit, however. Nor do they diminish the deft wit and breathtaking powers of observation that distinguish this debut of a new literary talent.

My review: For me, Mouthing the Words read like a gloriously British version of The Bell Jar, which is one of my all time favourites so that's high praise, trust me. While Gibb's debut novel won't necessarily leave you with a smile on your face I can promise you'll feel as though you've been on Thelma's journey alongside her and what a journey it is. She has a strained relationship with her parents, to say the least, and struggles to fit in, wherever she is.

A lot of controversial issues are dealt with in Mouthing the Words and at first I was worried it was going to be a little heavy going but it does maintain a sense of humour and a lightness that I wasn't expecting. There's a frankness about Thelma that I really warmed to and it's impossible not to like her, though she is a complex personality.

Mouthing the Words is a quick read, easily manageable in a single sitting and I think it's probably best read that way - Thelma's narrative is so engaging that it's difficult to turn away from this one, especially once Thelma returns to England and begins her studies at Oxford. For me, that's where the book really picked up the pace and drew me in. The other girls who live with Thelma are brilliant, unforgettable characters and I'd love to see a film adaptation of Mouthing the Words, just to see them brought to life.

The story is written in the first person present, which is not something I've seen done particularly well, on the whole. However, it suits Mouthing the Words perfectly and I was so impressed with Gibb's writing, which is subtle but beautiful at all times. It's really hard to believe that this is a debut novel - everything about it feels so accomplished, from the story to the realism of the characters. Just wonderful.

First line: 'This is where the man called our father comes from: he is sitting in a barn with his brothers Garreth and Timothy on a rainy April afternoon in the Cotswolds.' 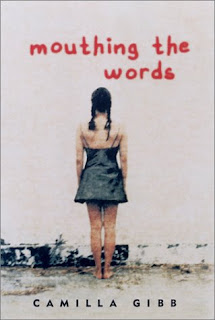