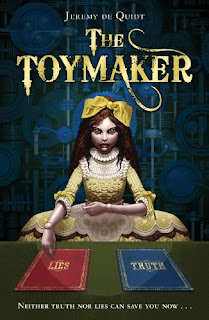 Summary (from Goodreads): What good is a toy that will wind down? What if you could put a heart in one? A real heart. One that beat and beat and didn't stop. What couldn't you do if you could make a toy like that?

From the moment Mathias becomes the owner of a mysterious piece of paper, he is in terrible danger. Entangled in devious plots and pursued by the sinister Doctor Leiter and his devilish toys, Mathias finds himself on a quest to uncover a deadly secret.

My review: The Toymaker has been sitting on my shelf for a few months now and, for whatever reason, I kept putting other books ahead of it on my TBR list. At a recent event another blogger told me The Toymaker was the scariest book she’d ever read and, for me, that decided it. I knew I had to check it out.

The Toymaker puzzled me, though I did really enjoy it. I wasn’t sure quite where it fitted into the marketplace – it’s marketed and listed as a book for children but there was some content that I definitely don’t think is suitable for kids. There are some elements of horror, yes, but I think they were perfectly written to shock and scare younger readers without going too far.

However, there was quite a lot of action and violence and I think some of this could be inappropriate for younger readers. Then again, the plot was quite linear and the characters a little simply developed so I don’t think this one would be too popular with older readers. I don’t know, I was just a little confused about who exactly the target audience is for the book.

I did found we were introduced to quite a few villains in The Toymaker who flitted in and out of the story so it did get a little confusing and none of them (apart from big baddie, Doctor Leiter) were really given much attention in terms of developing their character. I had a couple of issues with our heroes in the book as well – for me Koenig’s purpose just wasn’t made clear at all and I wish we could have learned a bit more about his backstory. Mathias and Katta, however, are both given a lot of attention and I felt like Katta was a great character. We got to hear a lot about her backstory and I grew to be really fond of her, especially once I learned about her accident.

One of the things I really liked about The Toymaker is that none of the characters are stereotypes. We have no absolute hero – Koenig is flawed, Katta certainly is and even Mathias has his problems. It was refreshing to read about realistic people – even if their situation was really extraordinary.

The Toymaker isn’t a happy story. There are no comedic elements and I doubt you’ll crack a smile from beginning to end. You won’t finish this book feeling uplifted (I felt a bit like I needed to scrub under my fingernails) but it will definitely have an impact on you. It stayed with me for a long time after reading and honestly, I think that’s the mark of a great story.