So today I have Andrea Seigel here at Writing from the Tub, talking about her life as a writer and her newest novel, The Kid Table (which is great, by the way). Without further ado, on with the interview! 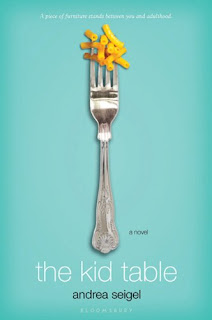 1. Talk me through an average day when you’re working on a novel. Do you have a set number of words you have to write per day or do you set yourself different targets?

My average day consists of getting back into bed and attempting to write two relatively solid pages, which I used to be more consistent at before I broke the streak during my dad’s last year of his life. Then it was like what happened to me and running— the day I decided to skip my usual six-mile run was the day that began the end of me exercising altogether. With writing, I’m better. I haven’t stopped. But I have become less religious.

2. In young adult fiction in particular, it’s important that readers bond with the characters - what do you think is the most important thing to get right when you're creating a character?

I think at least half the people who’ve read me would probably argue that I don’t create relatable characters. I mean, they’re relatable to me, relatable to certain readers, but my main concern when creating a character isn’t that she’s your comforting best friend put down on paper. I’m more interested in starting out with some fear I have about myself or with the challenge of attempting a personal outlook that’s always been hard to explain. And from there I’m mostly concerned with turning an inner truth (as I know it) outward. But obviously not everyone shares the same psychology, so it’s not like every reader is going to see a certain point-of-view as one that’s recognizable.

3. For you, what is the most rewarding thing about being a writer?

4. Do you own a Kindle or other e-reader? What’s your opinion on them?

I don’t, but I bought my boyfriend the Kindle for Christmas and he tried his best to get me excited about it, about how the picture is really ink rearranging itself. But I like having a book as a physical object. In my head, electronic books all get squashed into the same entity because you can’t see the texture on a cover, you can’t feel how thick that book is, you can’t get attached to quirks of a font. Font is really important for me.

5. The YA book market is a competitive place, what do you think sets your books apart from the pack?

Well, I guess that difference in Kid Table speaks for itself if you go on Goodreads and read the comments of some of the more frustrated YA readers. But my latest book is the only one that was officially released YA— the other two were adult trade, so they don’t really get that kind of response. You know, it’s really hard to answer this question without sounding like an asshole.

I used to watch TV while I wrote— especially reality TV— but over the past couple of years I’ve started preferring silence.

7. Are you a plotter or a pantser? Have you always been this way?

I’m not really a plotter in the sense that I intricately map out a story before writing, but I do always start with a specific idea that I know I want to get into. With my first book, it was “how do you explain suicidal feelings when you can’t really point to any one solid factor making you feel suicidal?” In the latest book, it was a question that actually appears in the Thanksgiving section: is it possible for anyone to ever know you better than you know yourself, or should we just be thankful for the rare true glimpses we actually get of each other?

8. How important do you think social media (i.e. Twitter/Facebook/blogging) is in today’s market for a writer?

I’m not even sure. When I started on Twitter, I think I was much more a part of the book side of it because it was literary people who first announced my arrival, but then when followers who wanted writing-related stuff saw that my interest is really in telling blue jokes, we separated. I had some anxiety for a minute because my Twitter feed tends to alienate, like, the librarians and the YA adults that I probably should be courting if I want to do well in YA. But when it comes down to it, that’s just not where I’m at, personality-wise. Same with my blog. And I think Facebook just lets people from my high school know I have a book they could potentially buy and keeps them up to date on pictures of my dog.

9. Which authors do you think have most influenced your own writing style?

J.D. Salinger, Bret Easton Ellis, Shirley Jackson, Jincy Willett. I really love John Irving and wish I could write more like him, juggle a bigger narrative like he does.

Well, figure out if you’re any good. And if you are, in what way you’re good.

When I was a teenager, a certain friend and I would go straight for the copy of The Joy Of Sex her parents had buried in the bottom of their dresser drawer every time they left the house. So, you know, you find your way to it. I also think that appropriateness is subjective and not very important. An accessible guidance figure in a teenager’s actual life is.

I haven’t been sent a single galley, so I couldn’t even tell you. Actually, I think Meg Rosoff’s new book There Is No Dog comes out this summer, and I haven’t read it, but everything she does is great, and so I already know it is too.

13. Thank you so much for your time, Andrea. Before you go, could you tell me about any projects you have in the pipeline we can look out for?

I’m writing a new book, which is about teenagers, but I’m guessing it’s probably better if I can go back to adult trade. There’s a script I wrote that’s with the producer of Winter’s Bone, and I think we’re going out to directors with that soon. And my boyfriend and I are pitching TV shows together. A meeting with us is like meeting with Tweedle-low-energy and Tweedle-lower-energy.

So, have any of you guys read The Kid Table, what did you think? It was great to speak to Andrea and I'd like to say a big thanks to her for stopping by :).
Posted by CarlyB at 16:00