So today I have Jody Gehrman here at Writing from the Tub, talking about her life as a writer and her newest novel, Babe in Boyland. Without further ado, on with the interview! 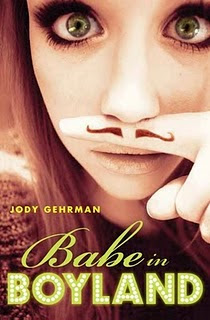 1. In case any readers haven’t read the book yet, can you tell me a little bit about Babe in Boyland?

Just to summarize quickly, Babe in Boyland is about a high school girl, Natalie Rowan, who goes undercover at an all boys school to get the skinny on what makes guys tick. She’s a journalist for her school paper, but she realizes nobody takes her advice column very seriously, so she decides to do some research to find out the guys’ perspective she’s been missing.

I really love the whole Shakespearean girl-dresses-as-a-guy trope. I find it entertaining and also thought-provoking—my favorite combination. My editor at Dial had worked on a nonfiction book called Self-Made Man by Norah Vincent about a journalist (Vincent) who lives as a man for a year; we agreed a similar tale could work really well for teens. So my editor's vision helped to prompt my own. Self Made Man was inspiring to me, as well as fun flicks like She's the Man and that oldie but goodie, Tootsie.

2. In young adult fiction in particular, it’s important that readers bond with the characters - what do you think is the most important thing to get right when you're creating a character?

I have to be able to see and hear my characters. I usually “cast” an actual person—either an actor or someone I know—in order to crystallize my vision. Occasionally, though, a character will just sort of materialize out of thin air, which is always a good feeling. It’s almost like being contacted by an ethereal being; that’s quite magical, but rare.

3. Do you own a Kindle or other e-reader? What’s your opinion on them?

Oh, God, I just bought a Kindle a few months ago and I’m surprised at how much I love it! I swear, this isn’t product placement, I just never expected to get so attached to it so quickly. New technology usually doesn’t attract me right away because I have a difficult time envisioning how it will affect my life; the Kindle was no exception. I figured old-fashioned books were fine and I didn’t need any more screens in my life. What I didn’t get is that for a moody reader like me, access is everything. I read a lot more now because I can get any book within minutes; that’s very powerful. I do miss the full colour covers and the texture/feel of paper sometimes, though, so occasionally I still pick up an actual book.

4. When reading for pleasure do you prefer to read standalones or series? Why?

I read both. I admire writers who can make one ongoing storyline vital and varied throughout a series. It’s difficult to pull off. Then again, I try to avoid getting into a rut as a reader. There are so many writers out there with different gifts I can learn from, so I try to read a vast range of authors rather than remaining loyal to just a few.

5. The YA book market is a competitive place, what do you think sets your books apart from the pack?

Well, first I have to say I’m honoured to be a member of the YA author “club.” Some of the freshest, most inventive storytelling is happening in this genre, and I love being a part of that. What I bring to the mix is colourful, vivid settings and characters who are strong but also deeply human. They’re flawed and funny. My themes tend toward the girl-power side of the house, and I generally highlight the quirky subcultures of northern California, my home.

I like silence when I’m writing; in fact, I often write with earplugs. Later, though, when I’m not working, I like to think about my characters and my storylines while listening to music. Some of my favourites are the Decemberists, Rogue Wave, Sheryl Crow, Ingrid Michaelson, Neko Case and Propellerheads.

7. Are you a plotter or a pantser? Have you always been this way?

I’m kind of a mix, and my technique really varies from book to book. In general I write an organic first draft that is steered only by vague notions of the big picture. Later I usually write detailed outlines and revision to-do lists. It’s a delicate balance between knowing where I’m going and allowing myself to run with the surprises.

8. How important do you think social media (i.e. Twitter/Facebook/blogging) is in today’s market for a writer?

I’m not sure. I know I can only handle so much of it, but that’s probably a handicap. I teach English at a small college full time, so after writing every morning and teaching all afternoon/evening, it’s pretty hard for me to find time for social media promotions. I admire writers who do it well, but it’s not enough of a priority for me to take time away from my writing schedule. I guess I cling to an old-fashioned belief that if I keep writing the best books I know how to write, readers will eventually find me. I definitely don’t want to be the creepy self-promoter lurking on web sites all day in the hopes of a sale, but I do like communicating with readers.

9. What advice would you give to writers who want to make the leap from writing as a hobby to actively pursuing a career in writing?

Write what you love as often as you possibly can and don’t let anyone who trivializes your work get too close to you. Take yourself seriously in terms of the amount of time and energy you give to it, but also let there be pleasure and a sense of whimsy in your writing life. External validation is always a blast, but it’s the delight you take in the writing itself that will keep you coming back.

10. Is naming characters important to you? What processes do you go through to come up with names for your characters?

I had to buy a baby name book for a writing class in graduate school and at the time I thought, “WTF? Why do I have to buy this stupid thing?” I’ve used it ever since! I also keep phonebooks by my desk for last names. They are important, and a character doesn’t really crystallize for me until I’ve found just the right name.

11. Do you think your teenage years have influenced you as a writer? If so, how?

I was into writing and theatre even as a teen; both of those experiences factored into my creation of Babe in Boyland, for sure. I was also really eager to travel and know other cultures; I was an exchange student in Japan and my family hosted a number of exchange students. I haven't really explored that part of my growing up experience yet in a single book, but I'd like to. I guess I always knew I wanted to write, and I’m grateful that my childhood gave me plenty of time to dream. Those were the years when my imagination got to flourish.

12. There is a lot of argument within the young adult market as to what is appropriate for teens to read. Where do you stand on this matter? Do you think teens should be protected from reading about taboo subjects or do you think they should have the freedom to choose their own reads?

One of my YA books, Confessions of a Triple Shot Betty, was recently “challenged” in a Texas school library. Apparently some parents got angry because their daughter was reading it and they found it offensive. They wanted it banned, basically. I was simultaneously flattered and horrified. I love the idea that this young woman risked the wrath of her parents to read my book, so for that reason I felt flattered. I was horrified, on the other hand, because in my opinion there was nothing in the deeper content of my book for parents to take issue with. Yes, there was some “language” and “adult content,” but I firmly believe the protagonist was a good role model, and to me that matters more than anything else.

I take issue with surface level censorship, which is what most Americans specialize in. They flip through a book, see offensive language here and there, and that’s it. They don’t bother to delve into the book’s themes, its lessons, its emotional content. Aren’t those much more influential in the end? I love that YA is much edgier now than when I was a teenager. I think it’s fantastic. Young people need a range of ideas and issues to choose from. If someone finds a book offensive, I suggest they stop reading it. If parents want to protect their children from certain ideas or subjects, that’s certainly understandable; I just hope they look past the most obvious red flags and consider the subtle messages embedded in the work.

13. Thank you so much for your time, Jody. Before you go, could you tell me about any projects you have in the pipeline we can look out for?

I’m rather superstitious about discussing works-in-progress, but I will say this: I’m experimenting with historical fiction and also urban fantasy. I find both genres challenging and super exciting. Delving into these arenas is opening new vistas for me as a writer. Hopefully this answer is mysterious and intriguing rather than annoyingly cryptic!

So, have any of you guys read Babe in Boyland, what did you think? It was great to speak to Jody and I'd like to say a big thanks to her for stopping by :).
Posted by CarlyB at 16:00