Mini reviews: The Hunt, Bartimaeus: The Ring of Solomon, Vampirates: Demons of the Ocean

So I like to try and stay up to date with the books I’m sent for review so I’ve decided to write a collection of mini reviews to be posted each week to help me keep up to date. This week I’m featuring mini reviews of The Hunt (Amy Meredith), Bartimaeus: The Ring of Solomon (Jonathan Stroud) and Vampirates: Demons of the Ocean (by Justin Somper). 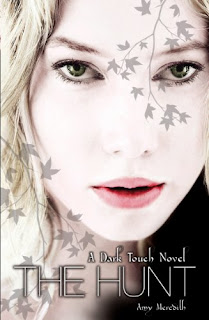 Summary (from Goodreads): Something is hunting. Something that will kill to get what it wants. And it isn't human. Eve knows that her supernatural powers are called for, but she'd rather focus on dating than demons and gorgeous Luke is, frankly, pretty distracting. He's already a friend - but could he be something more? Do Luke and Eve really have a future? And with demons on the hunt, will either of them live long enough to find out?

My review: I'll start this review by saying that I haven't read Shadows, the first installment in the series, so that could account for why I didn't particularly enjoy this one. There are a number of very positive reviews out there for this series so don't let me put you off - it just didn't work well for me but that doesn't mean you won't love it.

I just found the writing a little lacklustre in The Hunt (maybe it's because this series is written by two authors, I'm not sure - though they are both awesome separately so that's probably not the case). I didn't particularly care for any of the characters so it was hard for me to feel invested in the story. I felt very detached from the plot and the love story... well, I wasn't very impressed.

Everything just seemed a little half hearted and rushed and the novel seemed to pass by very quickly without very much action taking place. The Hunt seemed like a bit of a filler novel so I wasn't a fan, unfortunately. 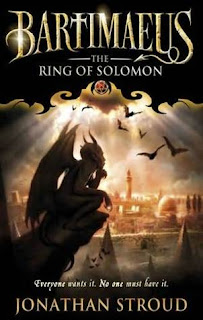 Summary (from Goodreads): Bartimaeus, everyone's favorite (wise-cracking) djinni, is back in book four of this best-selling series. As alluded to in the footnotes throughout the series, Bartimaeus has served hundreds of magicians during his 5,010 year career.

Now, for the first time, fans will go back in time with the djinni, to Jerusalem and the court of King Solomon in 950s BC. Only in this adventure, it seems the great Bartimaeus has finally met his match. He'll have to contend with an unpleasant master and his sinister servant, and runs into just a "spot" of trouble with King Solomon's magic ring...

My review: If you're a fan of The Secrets of the Immortal Nicholas Flamel series (by Michael Scott) then I'd definitely point you in the direction of Jonathan Stroud's books. The series' have a similar tone of story telling about them and both register pretty epic on the fantasy scale. What I would say (as a positive about this series) is that Jonathan Stroud's books have a little more humour in them, which is something I loved.

The dialogue is definitely the strongest part of The Ring of Solomon - the comedy used is fantastic and I guarantee you'll be laughing out loud by the end of this one. Bartimaeus is hilarious narrator, I'm a huge fan!

Another thing that's great about The Ring of Solomon is that you can read it as a standalone as well as part of the series - I haven't read any of the other books in the series and I didn't find myself tripping over anything that didn't make sense. Technically it's supposed to be a prequel but I think it's nice to have the option of just reading this one, without becoming tied into the rest of the series.

The sheer amount of research that clearly went into The Ring of Solomon is incredible and I was so impressed with Stroud's dedication to the story. I really enjoyed this one as a standalone, I'm not 100% sure I'll continue with the series right now but I would like to read more of Stroud's work at some point when I have a little less on my TBR pile! 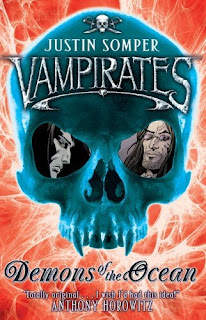 Summary (from Goodreads): Connor and Grace are twins, recently orphaned after their widowed father's death. Rather than being adopted by the town's busy-bodies, they decide to set sail for new pastures in their father's last single possession, his sailing boat. But a vicious storm sees their boat capsize and the twins separated. Two mysterious ships sail to their rescue - each picking up one twin before disappearing into the mist.

Connor wakes to find himself on a pirate ship and is soon being trained up with a cutlass. Meanwhile Grace finds herself locked in a darkened room, as the vampirates await nightfall... Determined to find each other, yet intrigued by their new shipmates, the twins are about to embark on the biggest adventure of their life...


My review: Okay, the first time I heard about the Vampirates series (shortly after I swore off paranormal romance and all things remotely related FOREVER) I have to admit I was a bit 'WTF?' about the whole thing. Pirate vampires. Okay. Fairies I can just about hold it together for. Sandmen? Starting to go a bit far for me. Pirate vampires. Off the scale. However, the whole thing seemed so completely mental that I knew I had to give the series a go (much like the William and Kate movie - SO bad it has to be amazing).

Okay - Vampirates: Demons of the Ocean is a great, entertaning read. I wouldn't go so far as to say it's amazing but it's certainly not bad at all. I did find myself ignoring the vampire side of things and choosing to believe our villains (although I am hesistant to call them villains because some of them are so damn charming) were just your run of the mill pillaging pirates. I don't know, I couldn't quite bring myself to commit to the story but this one was so much better than I thought it was going to be.

I imagine I would be quite obsessed with this series if I was a fan of the genre but, as it's probably the polar opposite of my ideal book, I'm not convinced I'll carry on with the Vampirates books. However - you just have to spend five minutes looking at the ratings on Goodreads to see just how popular this series is with its target audience!

Labels: Bartimaeus The Ring of Solomon, Mini reviews, The Hunt, Vampirates Demons of the Ocean