So I like to try and stay up to date with the books I’m sent for review so I’ve decided to write a collection of mini reviews to be posted each week to help me keep up to date. This week it's a bit of a Blue Bloods special as I’m featuring mini reviews of Masquerade, Revelations and The Van Alen Legacy (all by Melissa de la Cruz).

Please note: These are books 2-4 in the Blue Bloods series so if you're not up to date do be aware of spoilers in the summaries - my reviews will be spoiler free. 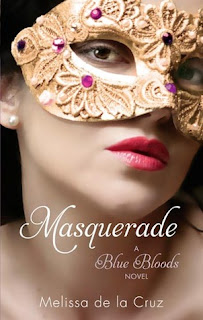 Summary (from Goodreads): Schuyler Van Alen wants an explanation for the mysterious deaths of young vampires. With her best friend, Oliver, Schuyler travels to Italy in the hope of finding the one man who can help—her grandfather. Meanwhile, back in New York, preparations are feverishly underway for the Four Hundred Ball, an exclusive gala hosted by the city's wealthy, powerful, and unhuman—a true Blue Blood affair.

But it's at the after-party, a masquerade ball thrown by the cunning Mimi Force, that the real danger lurks. Hidden behind the masks is a revelation that will forever change the course of a young vampire's destiny.

My review: While I enjoyed the first installment in the Blue Bloods series, I wasn't in a huge rush to dive into the next book so it did take me a little while to settle back into Schuyler's world when I began reading Masquerade. What surprised me, though, was how easily I remembered all of the characters, despite the fact I'd read the first book a few months previously.

Masquerade is a solid second book in the series - we learn a lot more about the characters than we did in Blue Bloods and also probe a lot deeper into the world Schuyler and co live in. We find out more about the history of the Blue Bloods, as well as their modern lives.

While Masquerade didn't rock my world in terms of storyline, I thought the writing was good and I find the whole mythology behind the Blue Bloods so interesting, it's definitely a new take on vampires and that's what keeps me coming back for more. 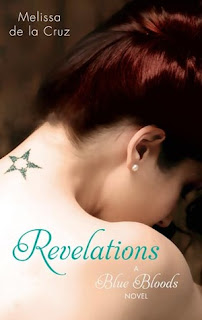 Summary (from Goodreads): Have you ever wondered what secrets lurk behind the closed doors of New York City's wealthiest families? They're powerful, they're famous...they're undead.

Schuyler Van Alen's blood legacy has just been called into question--is the young vampire in fact a Blue Blood, or is it the sinister Silver Blood that runs through her veins? As controversy swirls, Schuyler is left stranded in the Force household, trapped under the same roof as her cunning nemesis, Mimi Force, and her forbidden crush, Jack Force.

When one of the Gates of Hell is breached by Silver Bloods in Rio de Janeiro, however, the Blue Bloods will need Schuyler on their side. The stakes are high; the battle is bloody; and through it all, Carnavale rages on. And in the end, one vampire's secret identity will be exposed in a revelation that shocks everyone.

My review: If you sit Revelations in between Masquerade and The Van Alen Legacy on your bookshelf (and let's face it, you all will as us book addicts cannot have a series shelved out of order, can we?) you'll notice that Revelations is somewhat thinner than the other two books. It's about fifty pages shorter than The Van Alen Legacy and I do think the story suffers because of it.

De la Cruz clearly had so much to fit into Revelations that I have no idea why it was so short - everything just feels too crammed in and there's no room for the prose to breathe and really sing, having read some of her other novels (away from the Blue Bloods series) I know that she's capable of really beautiful writing but I just didn't see it in Revelations.

There is a lot of action towards the end of the book that I think was well written but everything felt so rushed, as soon as the story really became exciting it was all over, so Revelations was a bit of a disappointment for me. However, the revelation (no pun intended) at the close of the book is a bit of a shocker so, despite how I felt about Revelations, I was still keen to press on with the series.

Summary (from Goodreads): With the stunning revelation surrounding Bliss's true identity comes the growing threat of the sinister Silver Bloods. Once left to live the glamorous life in New York City, the Blue Bloods now find themselves in an epic battle for survival.

Not to worry, love is still in the air for the young vampires of the Upper East Side. Or is it? Jack and Schuyler are over. Oliver's brokenhearted. And only the cunning Mimi seems to be happily engaged.

My review: This is more like it. The Van Alen Legacy is a much stronger book than Revelations, so I urge any of you vampire fans who are starting the series to keep with it - things take a bit of a dip at book three but the one definitely makes up for it. It's longer in length so we see an extra fifty pages or so where the characters have the space to really come to life.

The main strength of The Van Alen Legacy is definitely the characters, as opposed to the story. While the story arc for the whole series is interesting, it wouldn't be enough to keep me coming back to the next book. However, Schuyler, Oliver, Jack and Mimi (who I love - I don't care if she's a massive bitch, she's awesome) are so great that I love reading about them and am always looking forward to the next installment.

The structure of The Van Alen Legacy is a little different from the other books - we see chapters being narrated from Bliss, Mimi and Schuyler's point of views and I will admit that it took me a little while to really settle into this layout. At first I did get a little confused about who was narrating the chapter but as the story progressed I think their voices developed and I did enjoy this one.

It definitely could have done with a bit more time spent on the editing (my main critique of the series as a whole is that it doesn't feel very well edited and always seems a bit rushed) but the structure was interesting and this one was definitely a lot stronger than Revelations. Phew.