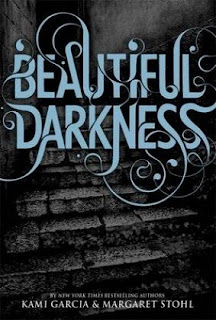 Summary (from Goodreads): Ethan Wate used to think of Gatlin, the small Southern town he had always called home, as a place where nothing ever changed. Then he met mysterious newcomer Lena Duchannes, who revealed a secret world that had been hidden in plain sight all along. A Gatlin that harbored ancient secrets beneath its moss-covered oaks and cracked sidewalks. A Gatlin where a curse has marked Lena's family of powerful supernaturals for generations. A Gatlin where impossible, magical, life-altering events happen.

Together they can face anything Gatlin throws at them, but after suffering a tragic loss, Lena starts to pull away, keeping secrets that test their relationship. And now that Ethan's eyes have been opened to the darker side of Gatlin, there's no going back. Haunted by strange visions only he can see, Ethan is pulled deeper into his town's tangled history and finds himself caught up in the dangerous network of underground passageways endlessly crisscrossing the South, where nothing is as it seems.

My review: I read Beautiful Creatures, the first installment in the series, last year and thoroughly enjoyed it. Through my enjoyment of paranormal romance has seen a steep decline lately, I wanted to continue with this series as I enjoyed the first book so much.

The writing is definitely what drives Beautiful Darkness forwards and the descriptions of Gatlin are just fantastic. I find it so easy to completely visualise the town and I really enjoy reading anything about the setting. However, while the writing is beautiful when it comes to the description of Gatlin, I did find it was a little over emotional at points.

I've seen this mentioned in a few reviews and I have to agree - things do get a little 'Twilight' in this installment. Lena leaving Ethan for his own protection - emo. Emo, emo, emo and I don't like it. For me, the love story is not the central part of the story but things are really amped up in Beautiful Darkness and I think it began to ruin the book somewhat. In Beautiful Creatures I loved learning the mythology and history of the town but in Beautiful Darkness there is so much emphasis on the love story between Lena and Ethan I began to get bored.

The plot is a little slow at first but it does pick up towards the end and the ending is really exciting, I have to admit. For all my grumbling about the love story I will be checking out Beautiful Chaos - I can't resist the gorgeous writing, I just hope a little less emphasis is placed on Ethan and Lena's relationship.

First line: 'I used to think our town, buried in the South Carolina backwoods, stuck in the muddy bottom of the Santee River valley, was the middle of nowhere.'