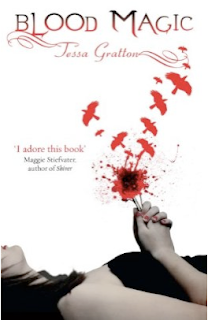 Published: July 2011, Random House
Pages: 405 pages, paperback
Series?: Yes, this is the first installment. The Blood Keeper (book two) is due out in 2012.
Acquired: Kindly sent for review by the publisher

Summary (from Goodreads): This page-turning debut novel will entice fans who like their paranormal romances dark and disturbing. It's a natural next-read for fans of Stephanie Meyer, Carrie Jones, and Becca Fitzpatrick. But instead of mythical creatures, blood magic has everything to do with primal human desires like power, wealth, and immortality.

Everywhere Silla Kennicott turns she sees blood. She can't stop thinking about her parents alleged murder-suicide. She is consumed by a book filled with spells that arrives mysteriously in the mail. The spells share one common ingredient: blood, and Silla is more than willing to cast a few. What's a little spilled blood if she can uncover the truth?

And then there's Nick—the new guy at school who makes her pulse race. He has a few secrets of his own and is all too familiar with the lure of blood magic. Drawn together by a combination of fate and chemistry, Silla and Nick must find out who else in their small Missouri town knows their secret and will do anything to take the book and magic from Silla.

My review: Blood Magic really has to be one of the most hyped releases this year. People have been talking about it for months and the buzz on the Internet is huge. Tessa Gratton really is one of the most exciting voices in YA paranormal romance and I know Blood Magic is going to blow up when it's released this July.

Gratton's writing is what makes Blood Magic such a strong book. I would never have guessed that this was a debut novel as her writing style feels so established already. I was really impressed with the structure of the book as a whole and I liked that some mystery was held back so we discovered things at the same time as the characters.

The opening chapters of Blood Magic just blew me away. The cemetary scene was absolutely fantastic and completely pulled me into the story. I did have reservations about reading this one, as I've lately sworn off paranormal romance, but after reading that scene I couldn't help myself. The book is paced really well as well, with so much going on it would have been easy for Gratton to overwhelm the reader but the pace dips when it needs to and the book certainly isn't without tension and chemistry... which leads me on to the one thing about the book I wasn't crazy about - the love story.

Enter Nick - the 'new guy in town' and Silla's potential love interest. Do I need to say more? I'm sure you can figure out the romance side of things for yourself. I think that's a shame, though. With paranormal romances I'm at the stage where I'll know from page one who the lead girl is going to end up with (aside from in Unearthly, which was brilliant) and I just wish things could be shaken up a bit. Wouldn't it be great to actually have no idea who the protagonist is going to fall for? Or, even better, wouldn't it be great to read a paranormal book without a love story? I'd love that.

So, yes, the love story in Blood Magic is just more of the same and I think it would have been just as strong if there was no potential relationship with Silla and Nick but, then again, I know I'm in the minority with this so I do understand it.

Blood Magic is a fantastic debut and I know everybody is going to love it. The writing is absolutely top notch and it's a brilliant start to a series that I know is going to dominate the market.

First line: 'I am Josephine Darly, and I intend to live forever.'

Read if you liked…: Shiver - Maggie Stiefvater, My Soul to Take - Rachel Vincent