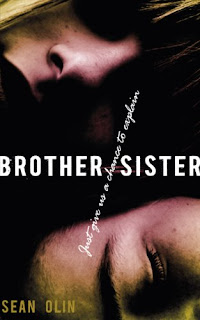 Summary (from Goodreads): Will and Asheley have a troubled past. Their father left them when they were little, and their mother has just been carted off to an alcohol treatment center. Now, they have the house to themselves, and an endless California summer stretching out before them.

Through alternating perspectives, they tell the story of how and why their lives spun violently out of control—right up to the impossibly shocking conclusion you'll have to read for yourself to believe.

My review: Okay - you have GOT to read this book. If you only take one recommendation from me this month then make it Brother Sister. This book will blow you away. Wow. I'm still in shock.

Will and Asheley (the only thing that I have to criticise is the spelling of Asheley - ugh) are brother and sister who have a close relationship. Maybe a little too close. Maybe not. Things do verge on creepy now and then but in such a brilliantly subtle way. They've had a troubled life and only have each other to rely on. Will is an oddball who doesn't do well in social situations and Asheley is desperate to fit in and have the summer of her life. Well, things don't quite go to plan when a house party ends in disaster - to put it mildly.

The writing in Brother Sister is fantastic. The voices of Asheley and Will are so well developed and I didn't confuse them for a second. It's brilliant to hear the brother and sister alternately narrate the events in the novel - especially towards the end of the story when the pace gets a bit INSANE, in the best way possible. I was literally out of breath when I finished Brother Sister and proceeded to shout about it to everybody within hearing distance for a long, long time.

The ending... Wow. Okay, obviously I'm not going to reveal a single thing but it is my FAVOURITE ending of any book I've read so far this year. It's just incredible. I had absolutely no idea how the story could end but it was perfect. Sean Olin, I salute you. You are a genius. Even if you don't think Brother Sister is your sort of thing you must read it, if only for the ending. Awesome.

I don't make a habit of criticising anybody's reviews (in fact, it's not something I EVER do) but there is a review out there that slates Brother Sister and has a bit of a rant about writers who 'send their novels off to print without finishing the story'. No, no, no. If I sound patronising then I'm sorry but this reviewer obviously missed the point of the ending - it is subtle but I think it's quite clear what the ending is and Olin certainly didn't send his book off to print without finishing the story. It just frustrated me as I saw a lot of comments on it from readers who had decided not to read the book based on her review - a massive shame as they're missing out on an absolute gem.

I have read a few reviews where people compared Brother Sister to Forbidden by Tabitha Suzuma. NO. Brother Sister is NOTHING LIKE Forbidden and I have absolutely no idea how people can compare them. Okay there is a slightly creepy relationship hinted at between the two lead characters but it's not at all the same as Fobidden in any way. So please, please don't let the ridiculous cries of 'INCEST IS BAD' put you off Brother Sister - if you enjoyed How I Live Now without freaking out about Daisy and Edmund then you're good to go.

Yes, Brother Sister will shock you but it will grip you from page one and will stay with you long after you've read the staggering final passage. Top notch stuff.

First line: 'How many times do I have to say it?'