Review: Cracked Up to Be - Courtney Summers 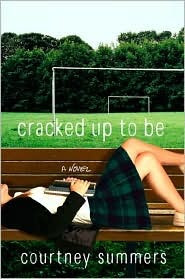 Her parents are on a constant suicide watch and her counselors think she’s playing games…but what they don’t know, the real reason for this whole mess, isn’t something she can say out loud. It isn’t even something she can say to herself. A horrible thing has happened and it just might be her fault.

If she can just remove herself from everybody—be totally alone—then everything will be okay...The problem is, nobody will let her.

My review: I read and reviewed Some Girls Are last year and it was my first go at reading a Courtney Summers book - it was actually one of the first books I ever reviewed, come to think of it. I loved it and was keen to try more - I've have Cracked Up to Be and Fall For Anything on my shelves for a little while now so thought I'd give her first novel a bash and see if I enjoyed it as much as Some Girls Are.

Yes I did, is the short answer. In fact, I actually think I preferred it.

Parker is a brilliant character. Without a doubt, she is what makes this book so great. She's brash, she swears like a sailor and is completely in your face. I'm sure lots of readers hated her and her filthy mouth, but me? I loved her. She's a flawed character who goes from hiding her flaws to wearing them on her sleeve but it's what helps to make her such a well rounded and real Chris, Jake and Becky was also great - especially Becky, who I definitely had a bit of a love/hate relationship with. I can't help but warm to a lovable bitch.

'The snowball effect' is something I hear about quite a lot in YA reviews and I think it's a device that's used to perfection in Cracked Up to Be. I've read a few arguments about its usage in Thirteen Reasons Why and, while I think Jay Asher did slightly miss the mark in that book, it's used so well by Courtney Summers. We see flashes of how Parker used to be - perfect on the outside but with all the stress, responsibility and fragility that comes with being a queen bee.

There's a mystery in Cracked Up to Be that really did keep me guessing until the 'event' (not the best word to use but I don't want to give anything away) was revealed. I kept thinking I knew what had happened to turn Parker from queen of her high school to a vodka swilling, bad ass bitch but I wasn't even close - and you probably won't be either. It's a bit of a shocker but nothing is gratuitous and I think Summers wrote the harder to handle scenes really well.

A brilliant, brilliant book - so hard to believe this is a debut. The writing is so strong. I can't wait to read Fall For Anything now and complete the Courtney Summers set :).

Labels: Courtney Summers, Cracked Up to Be, Review