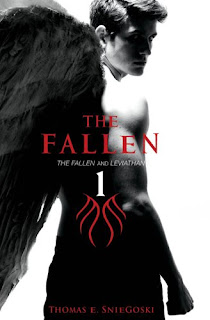 Summary (from Goodreads): On his eighteenth birthday, Aaron begins to hear strange voices and is convinced he is going insane. But having moved from foster home to foster home, Aaron doesn't know whom he can trust. He wants to confide in the cute girl from class, but fears she'll confirm he's crazy.

Then a mysterious man begins following Aaron. He knows about Aaron's troubled past and his new powers. And he has a message for Aaron: As the son of a mortal and an angel, Aaron has been chosen to redeem the Fallen.

Aaron tries to dismiss the news and resists his supernatural abilities. But he must accept his newfound heritage — and quickly. For the dark powers are gaining strength, and are hell-bent on destroying him...

My review: Based on the cover I did think The Fallen was going to be just one more paranormal romance about fallen angels etc etc. However, I'm pleased to report that this one does stand out from the pack a little, though unfortunately I do think the writing lets it down.

Aaron is a really likable lead - not at all how I thought he would be. He's sweet and human and isn't instantly tough, he just seems like a regular kid and I found it really easy to get to know and bond with him. His confusion over the voices he hears is really well written and I did feel for him, having nobody to turn to and feeling more and more suspicious of those around him.

I'm also happy that the love story didn't take over the book as it would in so many other paranormal stories so that was a big plus point for me. However, as I mentioned before I think the writing does let The Fallen down. The story has a lot of potential but I just don't think it was written as well as it could have been. It was very wordy and I think a lot of the slower paced sections could have been edited down a little to make the novel more concise and exciting.

I'm not really sure why The Fallen is made up of two books - the stories are somewhat separate but it definitely felt like one book and I haven't seen it marketed separately anywhere (let me know if I'm wrong about that). The book (counting it as one) is quite thick so it did take me a while to get through this one, especially because the story was a little slow to start.

I probably won't be picking up the next book in this series. I know a few other readers who loved this one but it didn't work for me. If you're already a fan of the fallen angel trend then I'd recommend this one to you but if you're beginning to tire of the paranormal genre then probably give this one a miss.