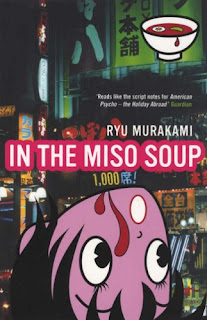 Summary (from Goodreads): From postmodern Renaissance man Ryu Murakami, master of the psychothriller and director of Tokyo Decadence, comes this hair-raising roller-coaster ride through the nefarious neon-lit world of Tokyo's sex industry.

In the Miso Soup tells of Frank, an overweight American tourist who has hired Kenji to take him on a guided tour of Tokyo's sleazy nightlife. But Frank's behavior is so strange that Kenji begins to entertain a horrible suspicion—that his new client is in fact the serial killer currently terrorizing the city.

It is not until later, however, that Kenji learns exactly how much he has to fear and how irrevocably his encounter with this great white whale of an American will change his life

My review: In the Miso Soup is, without a doubt, one of the most interesting novels I've read this year. I want to recommend it to everybody I know who reads but I know that wouldn't be a good idea. This certainly isn't a book for anybody but, if you aren't easily offended and like your books with a creepy intensity then you'll definitely love this one - the comparisons to Silence of the Lambs and American Psycho are spot on.

The intensity of In the Miso Soup is crazy - I was nervous from page one and ready for something horrific to happen the entire way through. I did think there was going to be more gore and violence than their was but I'm glad Murakami used it sparingly - it made the few violent moments much more shocking.

Kenji was such an interesting narrator and his character is definitely what helped to make In the Miso Soup so interesting. I wasn't always sure whether he was reliable or not and the unsolved murders throughout the book made me question everybody - at times I thought Frank was all in Kenji's head, I thought Kenji was in Frank's head... at another point I thought everything was in Jun's head! Sometimes I thought Kenji had committed the murders, another time I convinced myself Jun was the killer and, of course, Frank was always close to the top of my list of suspects. Now maybe I was right about one of those points, maybe I was wrong - you'll have to give the book a go to see, won't you?

Murderer or not, misunderstood or not, Frank was an absolutely hideous character. Repulsive, rude and unpredictable, he was a true villain and genuinely scared me. He seemed to have a quietly passive agressive streak running through him and was prone to snap at any moment - terrifying. What I hated is how normal he was, he just seemed like a regular businessman who you could run into anywhere in the world. The fact he was so unassuming on the surface made him all the more unsettling.

Courtney Summers has written a brilliant review of this one on Goodreads so if you're still not sure whether you'll like it or not I urge you to read her review, I hope it'll make up your mind. She makes some excellent points, especially where she says In the Miso Soup reminds her of a Robert Cormier novel - he's one of my favourite authors and I did think that on a few occasions. There you have it - if you like Silence of the Lambs, American Psycho, Robert Cormier OR Courtney Summers then this one is for you!

First line: 'My name is Kenji.'

Read if you liked…: , American Psycho - Bret Easton Ellis, Audition - Ryu Murakami (ha! I'd been saying to myself how these two books reminded me of each other and I've only just realised they're by the same author. Win.)