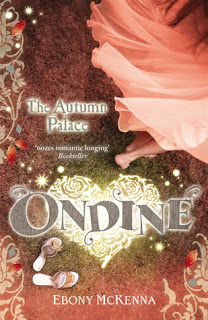 Published: February 7th 2011, Egmont
Pages: 371 pages, paperback
Series?: Yes, this is the second installment. The Summer of Shambles is book one in the series
Acquired: Kindly sent for review by the publisher

Summary (from Goodreads): One boy, one girl, one plot to be foiled! Hamish the gorgeous man (and part time ferret) has a new job with the Duke as a spy in his Autumn Palace. So Ondine goes with him. She imagines a hugely romantic escapade together that involves lots of kissing.

What she hadn't imagined was having to do endless laundry, go to school and keep Hamish the man a secret. All the while trying to find out who is plotting to kill the Duke. And if that weren't bad enough, it seems that Hamish is more interested in getting the Duke's attention than hers. Plus he's always in ferret form. Things can't go on like this!

Can Ondine foil the would-be assassin, save the Duke and get her man back in gorgeous human form? It's going to take a little bit of magic, a lot of stolen kisses and some ferreting around...

My review: I want to start by mentioning that the cover for The Autumn Palace is beautiful! It's really one that you keep noticing little details on so I think the cover designer did a great job. Things inside are pretty as well with stars on the pages and hearts at the beginning of each chapter - I'm a sucker for details like that.

This installment is the second in the series but I have to say I think it worked really well as a standalone. I haven't read the first book and I wasn't confused at all, I wouldn't have even guessed there was a book that came before it. I think I will go back and read The Summer of Shambles now, as I really enjoyed The Autumn Palace and would like to see how the series started off.

I really liked the dynamic between Ondine and Hamish - it was nice to read a book that had an already establishment relationship, rather than having to go through chapters and chapters of emo sighing and longing for the 'hot new guy in town'. There is some drama between Ondine and Hamish, when Ondine becomes concerned Hamish is spending too much time working for the duke but this was a relationship I liked reading about.

I'd definitely recommend The Autumn Palace to anybody who likes a bit of whimsy in their lives - this is a pretty little book that made me smile the whole way through. Absolutely charming.

First line: 'Let's get things clear from the outset.'