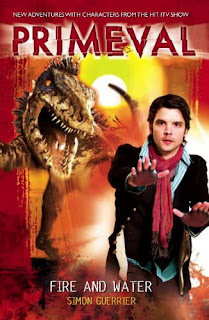 Summary (from Goodreads): When strange anomalies in time start to appear Professor Cutter and his team have to help track down and capture a multitude of dangerous prehistoric creatures from Earth's distant past and terrifying future...

In this brand new original never-seen-on-TV Primeval adventure, the team confront anomaly crises both in rain-swept London and on hot South African plains. At a safari park in South Africa, rangers are disappearing and strange creatures have been seen battling with lions and rhinos.

As the team investigate they are drawn into a dark conspiracy, which could have terrible consequences; while back at home in England, as torrential rain pours down over the city, an enormous anomaly opens up in East London.

My review: I reviewed one of the other Primeval titles earlier this year and I wasn't much of a fan - however, I thought I'd give one of the other books a go to see if things picked up. Did they? Unfortunately I'm not sure they did. I'm sure a lot of readers will love this series but it's just not for me.

I found the writing extremely awkward and this made it difficult to settle into the story. I found the dialogue to be really distracting, especially because it seemed as though the writer was trying to use any exclamation aside from 'said' - something that really grates on me.

I picked a random two pages (twenty two and twenty three) and found the following exclamations used (plus two uses of 'said'):

Do you see what I mean? It's a style issue and I know it could just be me but I found it really difficult to get into the flow of the dialogue when everything had to be broken up with constant exclamations. It did remind me a little of an exercise I had to do back in primary school, where we had to write a page of dialogue without using 'said'. I don't want to cause any offense but any writing that reminds me of an exercise aimed at a seven year old is not good in my book.

The storyline is a little reminiscent of Jurassic Park so I did enjoy those elements once I managed to ignore the awkward writing. The characters weren't at all three dimensional and I could barely remember their names. I just didn't enjoy this book. Maybe you will. If you've written a more positive review do let me know in the comments!