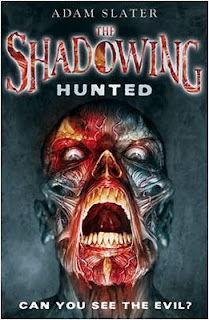 Published: May 2nd 2011, Egmont
Pages: 270 pages, paperback
Series?: Yes, this is the first installment. The second book, 'Skinned', is due out in 2012
Acquired: Kindly sent for review by the publisher

Summary (from Goodreads): The girl lies by the canal, her face turned upwards like a stargazer. But she will never see the stars again. Her eyes have been torn out. The rain fills the empty sockets until they brim over, spilling bloody tears down her cold, white cheeks.

Once every century, the boundary between the demon Netherworld and the human world weakens. Legions of creatures gather, preparing to cross over, to bring death and destruction. This time is called The Shadowing.

Callum has always known that there is something beyond the mortal world - he can see ghosts. Lately, he's started to have horrific visions of children murdered by some terrible, unseen creature. And then the visions start to come true - and Callum realises he is being hunted too. But Callum must stay alive. He is bound by a dark destiny, and must stand against the demon forces that threaten our world forever. For it is nearly time. The Shadowing is coming...

My review: I'm so happy this book has been published! We need more YA horror (yes, yes, I know I say this all the time but it's true) so I'm really excited about The Shadowing series. This one will definitely appeal to boys (and girls) and it has a lot to offer - from great writing, a terrifying storyline and an awesome cover so I'm sure it's going to do very well.

Let me start by talking about the cover, which I love. Yes, I'm sure it's going to get a strong reaction from people who think it's too gory for younger readers but, pshhh, I think it's great. A proper horror cover is just what this series needs so I'm really pleased that's what it got. It's so eye catching that I know it's going to attract so many readers, I can't wait to see how the covers for the others in the series turn out.

At the end of this post I've recommended this book to any fans of Simon Holt's Devouring series - the cover of Hunted did remind me loosely of the cover for The Devouring (a brilliant book) and the tone of the two is fairly similar. Aside from Holt and Shan there weren't really many YA horror series out there so Slater is definitely a welcome addition, for me anyway.

Slater's writing is so tight and it's clear Hunted has been edited to perfection - I didn't spot a single typo or grammatical error (and that was in an ARC as well) and it's just a joy to read. It's a quick read as well - mostly because it's impossible to put it down once you're sucked into the story!

Callum's great - a brilliant protagonist and a really human character. However, I did feel as though some of the supporting characters were a bit too linear so I hope we see them develop in future installments. The characterisation was the only thing that I felt let Hunted down just a bit, aside from that it's a fantastic adventure that will have you on the edge of your seat from the outset!

First line: 'Rain drills the surface of the black canal.'

Read if you liked…: The Devouring - Simon Holt