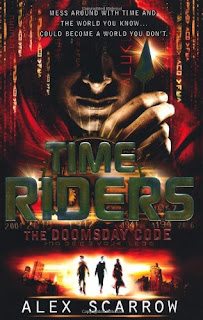 Summary (from Goodreads): Liam O'Connor should have died at sea in 1912. Maddy Carter should have died on a plane in 2010. Sal Vikram should have died in a fire in 2026. But all three have been given a second chance - to work for an agency that no one knows exists. Its purpose: to prevent time travel destroying history...

My review: Despite having my initial reservations I'm really glad I decided to start this series. I love anything that features an altered history and the TimeRiders series is so clever in everything it does.

We see Liam and Maddy leading the pack in this installment and it's really nice to see how Liam has grown from the naive boy he was at the beginning of the series. I did like that Maddy was given a little more page time and she's really growing on me. I wish Sal hadn't faded into the background quite as much as she did in this book so hopefully we'll see her playing a more prominent role in the later installments in the series.

We see the story of Robin Hood explored in this book and I really did enjoy the story. Scarrow is such an exciting writer and the pace and tension in The Doomsday Code was excellent. I urge all of you to give this series a go - on the surface it really isn't my kind of thing at all but I'm so glad I decided to try it. Roll on book four!

First line: '"So, ladies and gentlemen," said the man, "this is what you all came to see."'