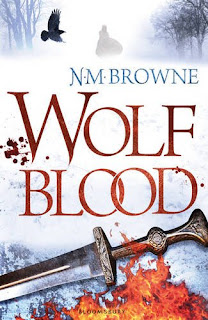 Summary (from Goodreads): A Celtic warrior girl is held captive and enslaved by a rival tribe. When fever takes her only friend she knows she must escape, but she runs straight into the path of two Roman foot soldiers. Thinking they will kill a warrior instantly, the girl disguises herself as a beggar and asks to share their fire.

Using her gift as a seer she discovers that one of the soldiers is not what he seems. Celtic blood courses through his veins too, but there is something else. He is a shapeshifter - a Versipellum. He shares his soul with that of the wolf. The girl needs to reach the leader of her dead friend's tribe, and the boy must escape the Romans before they discover his true nature. Their only chance of survival is to help each other. But what will happen when their powers are combined?

My review: The first thing I want to say about Wolf Blood is that the ARC is really pretty. I know I should judge this one by what's inside but it really is a nice ARC - the pages are thick and I think it definitely could have gone to print as the final book. That said, I do really like the final cover.

Wolf Blood is a book with fantastic crossover appeal - this will delight fans of the fantasy genre and I think both adults and teenagers will love it. The world building is superb and Browne's writing is gorgeous. Her sentence structure is great and I love how she uses a mixture of snappy, short sentences and long, beautifully descriptive lines.

Wolf Blood is a breath of fresh air after so many paranormal romance werewolf novels. This is a fantasy story through and through and feels as though it's already a classic, rather than a novel that's coming out this July. The use of both Celtic and Roman mythology is so well used and, as I said before, I was so impressed with the world building in Wolf Blood.

The narrative splits between Morcant and Trista's points of view and I loved how the story was linked between the two protagonist. Their voices were very well done and it was easy to tell whose chapter was whose, wirh no confusion between their voices.

Trista was a brilliant female lead - strong and intelligent, she made such a nice change from the weak-willed girls who tend to feature heavily in your run of the mill paranormal romance. Trista has a purpose and a cause - she's not the sort of girl you'll see running off with the 'gorgeous new boy' just because he's pretty. Yay for girl power.

Wolf Blood really impressed me. I'm not a massive fantasy fan but I really did enjoy this one, I do hope that YA fantasy moves away from Twilight-esque paranormal romances and towards the fantastic world-building and strong characters that feature in Wolf Blood.