So I like to try and stay on top of the books I’m sent for review so I’ve decided to write a collection of mini reviews to be posted each week to help me keep up to date. This week I’m featuring mini reviews of the first three books in the Airhead series by Meg Cabot.

Summary (from Goodreads): Emerson Watts, 16 and female, loves playing video games, hanging out with her best friend, Christopher, and has made peace with her less-than-supermodel-esque looks. But when she's involved in a mysterious accident, she wakes up to find she's now in the body of...a supermodel. Who was behind this switch? What was the motive? And how can she get Christopher to realize she's still the same person inside?

My review: Will Meg Cabot ever released a book that I don't immediately love? I don't think so. Her writing is just superb, her characters realistic and her storylines so tight that you can't help but be drawn into the world she creates in each one of her books. She really is the overlord of YA fiction and I become a bigger and bigger fan every time I read another one of her stories.

The Airhead series is off to a great start with this installment - we learn about tomboy Emerson's life before she's mysteriously transported into supermodel Nikki Howard's gorgeous body and her friendship with hottie Christopher. Emerson is a brilliant protagonist. She's so likable and easy to relate to for any teenage girl as she has her insecurities as we all do/did as teens.

I loved slowly learning about Nikki's complicated life and scheming Brandon, Nikki's ex. Things are set up so well for the second book in the series but Cabot doesn't end the book with too many loose ends or cliffhangers. There's the perfect amount of mystery here and I guarantee the series will satisfy all contemporary YA fans. 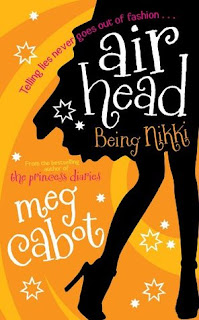 Summary (from Goodreads): Teen supermodel Nikki Howard has a secret. She's not the gorgeous golden airhead she seems - on the inside she's someone else. Literally. Em Watts is stuck in the body of glamazon celebutante Nikki. And it's not easy. Especially when Nikki's past is about to catch up with her, her boss is spying on her, and Em's heart wants one thing but her lips keep kissing someone else...

My review: In Being Nikki we see the Airhead series move in a completely different direction than it did in the first book but I loved it for that.

We learn a lot more about Nikki herself in this installment, which is something I was really hoping for. The inclusion of Nikki's brother, Steven, was great and he answered a lot of the questions that were raised in Airhead.

Being Nikki is a light-hearted quick read that you'll storm through - there are laughs on every page and a whole host of new characters that make this installment even better than the first. But, let's face it, anything by Meg Cabot is always going to be a hit so no surprises here! 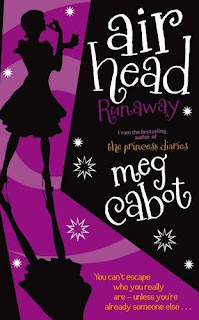 Summary (from Goodreads): Emerson Watts is on the run: from school, from her family and from herself. She's reeling from the shock that Nikki, the girl whose body her brain was forced to inhabit, is still alive. And she's furious. Manipulative Brandon plans to use Em to discover a secret that will ensure his success, whilst Christopher is out for revenge, fuelled by his jealousy. With everyone around her playing a dangerous game, maybe Em should just keep on running...

My review: Using her signature humour, excellent characterisation and fantastic writing, Meg Cabot is back with another winner with the third book in the Airhead series.

The action is ramped up in Runaway, where we see Em on the run after the shocking revelation at the end of Being Nikki. Cabot does a brilliant job with the feeling of isolation and solitude that Em goes through, especially when even best friend Christopher turns on her.

I don't want to reveal too much about the story as there are so many potential spoilers I could write about - so much is crammed into Runaway that you'll finish the book feeling exhausted! The excitement doesn't dip for a moment and the stakes are high - super villain Brandon means business, that's for sure.

I honestly can't recommend this series enough - I'd love to be able to talk about the books in detail but this series was such a lovely surprise for me I think it's definitely best to go in blind so you'll just have to take my word for it. Any Meg Cabot fans already know what a genius she is but if you haven't given any of her books a go yet then I'd really recommend starting with this series.