Mini reviews: Inside My Head, Pretties, Diary of a Wimpy Kid: The Ugly Truth

So I like to try and stay up to date with the books I’m sent for review so I’ve decided to write a collection of mini reviews to be posted each week to help me keep up to date. This week I’m featuring mini reviews of Inside My Head (Jim Carrington), Pretties (Scott Westerfeld) and Diary of a Wimpy Kid: The Ugly Truth (Jeff Kinney).

Inside My Head - Jim Carrington 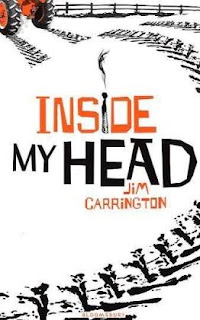 Summary (from Goodreads): This cleverly constructed narrative consists of three points of view: of Gary, constantly victimised by the school bully in a nasty, name-calling and vindictive way; the bully's friend, David and a new girl to the school, Zoe. All viewpoints are revealing.

Gary reveals the painful and often unsuccessful attempts by a young man to control his anger under great provocation - and his inability to communicate. David is someone who is uncomfortable with the bullying but doesn't dare to do anything about it - until the end. Zoe is a young woman who can see Gary through different eyes and is independent, freethinking and brave.

Also featured in this title are rampaging tractors, shotguns and cheese puffs.

My review: Okay, so any summary that includes the line 'Also featured in this title are rampaging tractors, shotguns and cheese puffs' is a winner, in my opinion. After reading the summary I was sold and I'm so glad I got the opportunity to read Inside My Head, as it's a completely unique novel that has the huge plus point of being extremely well written.

The three points of view work really well together and bring the novel to life. David's voice was particularly engaging and it was really nice to see another dimension to the stereotypical 'bully's sidekick'. Quirky Zoe grated on me just a little, not enough to detract from my enjoyment of the novel but it is what stops me marking this one higher.

This is the first novel by Jim Carrington that I've read but I'll definitely be checking out In the Bag shortly. I also want to point out that I love the cover art of both Inside My Head and In the Bag, both simple but very effective. 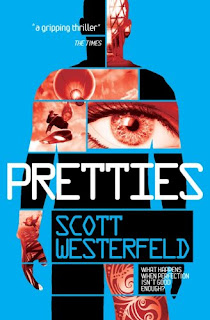 Summary (from Goodreads): Tally has finally become pretty. Now her looks are beyond perfect, her clothes are awesome, her boyfriend is totally hot, and she's completely popular. It's everything she's ever wanted. But beneath all the fun -- the nonstop parties, the high-tech luxury, the total freedom -- is a nagging sense that something's wrong. Something important.

Then a message from Tally's ugly past arrives. Reading it, Tally remembers what's wrong with pretty life, and the fun stops cold. Now she has to choose between fighting to forget what she knows and fighting for her life -- because the authorities don't intend to let anyone with this information survive.

My review: Big, big sigh. Well, I don't think I've ever felt so let down by a second novel before. Seriously, this was really, really bad - in my opinion, at least. If you take a look at the Goodreads page for Pretties there is a real mixed bag of reviews - there are a ton of 5* reviews, naturally, but it seems I agree with more people than I thought.

For me, the main issue is the slang used in the novel. It made me want to punch someone, it really did. Yes that may sound a little extreme but, honestly, if I heard that something made Tally feel 'bubbly' one more time... Seriously. I did start off underlining every bit of slang that pissed me off but that got a bit ridiculous. However, I would just like to share a very, very small selection of the phrases that grated on me, taken from three pages:

- "Of course, that wouldn't be very bubbly, would it?"

- He reached for Tally's hand, drew her to him, and they kissed again.
She blinked once, then felt a grin spreading on her face. "Just to keep us bubbly."

Oh, seriously? This whole 'bubbly' thing? I couldn't deal with it. The story would be ticking along nicely, I'd be really getting into it and then there'd be two pages of ridiculous 'bubbly' references and I'd spend the next two chapters trying to forget how much it annoyed me. Not a great recipe for enjoyment, I assure you.

Now, Scott Westerfeld is a great writer and I'm a big fan of his. I'm hoping this is just a blip and that I'll enjoy Extras and Specials as much as I did Uglies, I'll definitely be reading them. 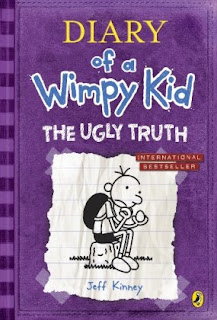 My review: Yay for Diary of a Wimpy Kid! Book five in the series is just as sweet and funny as the rest of the series and I continue to be so impressed with Jeff Kinney's writing. I can see how boys (and girls) are completely obsessed with the series, I know I would have been if they'd come out when I was younger.

In this installment we see Greg mature somewhat and, as such, the tone of the books does change a little bit. It's great to see what a journey Greg has come on and it's nice that readers of the series have been able to grow up alongside him and relate to the difficulties he goes through in The Ugly Truth. Teenage years are difficult for both boys and girls and I really think that books like this can make these awkward years a little bit more bearable.