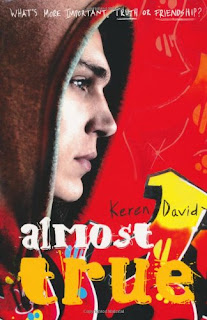 Summary (from Goodreads): Ruthless killers are hunting Ty so the police move him and his mum to a quiet seaside town. But a horrific attack and a bullet meant for Ty prove that he’s not safe.

On the road again, Ty’s in hiding with complete strangers . . . who seem to know a lot about him. Meanwhile he’s desperate to see his girlfriend Claire, and terrified that she may betray him. Ty can’t trust his own judgement and he’s making dangerous decisions that could deliver him straight to the gangsters.

A thrilling sequel to When I Was Joe, shot through with drama and suspense.

My review: If you're unsure whether to pick up When I Was Joe and Almost True then I'd suggest you have a quick look on Goodreads at the ridiculous amount of positive reviews there are for both of these novels. So much praise has been heaped upon both of them and with good reason - both books are fantastic.

In Almost True it feels as though all of the tension and drama in When I Was Joe is back but this time it's multiplied. The stakes are higher than ever and that makes for some exciting reading, especially when coupled with David's brilliant prose. Obviously I don't want to give away much about the plot but all you need to know upfront is in the synopsis above.

We see Ty grow even more in Almost True and he's almost unrecognisable as the scared youth we saw in When I Was Joe. He really has become a man and it's great to see how his character has developed over the course of the two books. We're introduced to numerous new characters in Almost True and each of them is crucial to the story - something else I love the books. Nothing is wasted in Almost True; every word, every description is vital to the plot and nothing has been put in purely to get a reaction.

There is some tough subject matter in Almost True and I appreciate how David deals with these sensitive issues. It all feels so realistic and I think both When I Was Joe and Almost True are fantastic books to recommend to teen readers, especially those in the UK.

First line: 'They come to kill me early in the morning.'

Read if you liked…: When I Was Joe - Keren David (the first in the series)