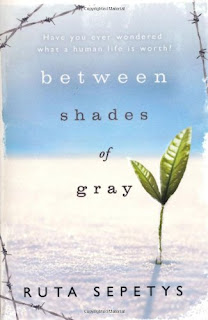 Summary (from Goodreads): One night fifteen-year-old Lina, her mother and young brother are hauled from their home by Soviet guards, thrown into cattle cars and sent away. They are being deported to Siberia. An unimaginable and harrowing journey has begun. Lina doesn't know if she'll ever see her father or her friends again. But she refuses to give up hope.

My review: Between Shades of Gray has already garnered a great deal of buzz throughout the book world and it completely deserves every line of praise it receives. This is a beautifully written book from a fantastic new voice in YA fiction and one I highly recommend.

This book will make you cry. That I promise. But it will also make you feel hopeful, which is the important thing. Sepetys doesn't shy away from difficult situations but she writes them wonderfully. Her prose is gentle and lyrical and I adore her style. I really cannot wait for her next release.

Lina is a fantastic protagonist, wise and brave beyond her years. In times of hardship she stays strong and she's such an inspiring character, definitely one that will stay with me. Her family are just as real and well developed and it's clear that Sepetys has put so much love into writing this story. And it's a story that needs to be told. I saw Septeys speak at an event earlier this year and the journey of discovery she went on to research Between Shades of Gray is remarkable - there were a lot of wet eyes in the audience (yes, including mine).

Between Shades of Gray is a stunning debut novel and if it's still on your TBR list I suggest you bump it up to the top - you won't be disappointed.

First line: 'They took me in my nightgown.'

Read if you liked…: The Memory Cage - Ruth Eastham