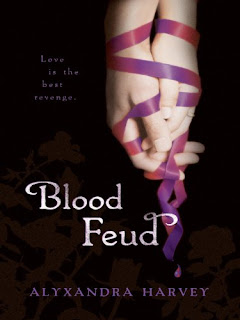 Summary (from Goodreads): It has been centuries since Isabeau St. Croix survived the French Revolution. Now she's made her way back to the living and must face the ultimate test by confronting the evil British lord who turned her into a vampire and left her buried for two hundred years. That's if she can control her affection for Logan Drake, a vampire whose bite is as sweet as the revenge she seeks...

My review: So I've made no secret of the fact I am not a fan of paranormal romances. At all. Especially paranormal romances that focus on vampires. There are so many series that centre around vampires that I've completely given up on the genre. Except for when it comes to Alyxandra Harvey, that is. I read My Love Lies Bleeding last December and loved it, much to my surprise, so I was really excited to be sent Blood Feud for review.

One of the things I love most about the Drake Chronicles is the mythology and politics that Harvey explores in each of the novels. I love that we learn about the different tribes of vampires, their culture and their laws. It's fascinating and definitely a refreshing change from the majority of vampire novels I've read before. I'm so glad that we got to learn even more in Blood Feud and I hope this carries on throughout the rest of the series.

I think the way this series is written is so interesting - we see the same cast of characters in each novel but each story is told from the point of view of different characters. In this installment we're introduced to Isabeau (the pricess of the Hound tribe) and our other narrator is Logan Drake, one of the younger brother who has a penchant for frilly cuffs and Victorian shirts.

I really liked the contrast of their narrative voices and particularly liked Isabeau - she's so different from the other characters in the books and I loved finding out more about the Hounds, the tribe she is a princess of. Their culture is so rich and her lifestyle is completely different to that of the Drakes, so it's no surprise that things don't run particularly smoothly in Blood Feud. But then that just makes for a more interesting story, doesn't it?

I felt that the love story took a bit of a back seat in Blood Feud - and I don't mean that as a negative at all. It was nice to see some emphasis put on something other than romance but the romance that was included was well written and not over the top, a la Twilight.

Harvey is doing wonderful things for the genre, in my opinion. Her female characters are always strong and independant and the romances realistic and well developed - well, as realistic as they can be when they involve vampires and the like! This is one of the only series that I read, as I'm much more of a standalone fan, and I really do hope there are at least a few more books planned. Maybe one for each brother. That sounds good to me.

First line: 'If Isabeau St. Croix had known it was going to be her last Christmas Eve, she would have had a third helping of plum pudding.'

Read if you liked…: My Love Lies Bleeding - Alyxandra Harvey