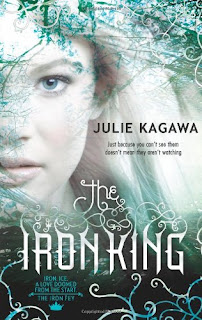 Summary (from Goodreads): My name is Meghan Chase. In less than twenty-four hours I'll be sixteen. Countless stories, songs and poems have been written about this wonderful age, when a girl finds true love and the stars shine for her and the handsome prince carries her off into the sunset. I don't think it will be that way for me.

Something has always felt slightly off in Meghan's life, ever since her father disappeared before her eyes when she was six. She has never quite fit in at school...or at home. When a dark stranger begins watching her from afar, and her prankster best friend becomes strangely protective of her, Meghan senses that everything she's known is about to change. But she could never have guessed the truth - that she is the daughter of a mythical fairy king and is a pawn in a deadly war.

Now Meghan will learn just how far she'll go to save someone she cares about, to stop a mysterious evil no faery creature dare face...and to find love with a young prince who might rather see her dead than let her touch his icy heart.

My review: Okay - if I had to sum up this series in one sentence I would have to say: Another paranormal romance series about faeries.

Faeries seem to be jumping ahead of vampires as the latest paranormal trend. I can't even count the amount of series there are that feature faeries and, while The Iron Fey series is a strong one, it isn't particularly original and it's only Kagawa's writing that makes it stand out against the others.

What I liked is that The Iron King was a little darker than a lot of the other fairy books I've read (I'm not using faery, I'm sorry, it grates on me). Things didn't feel too Hollywood or sugar coated. I felt as though any character could have been killed off at any moment that that sense of tension and mystery is something I enjoyed.

I think the characters are what stopped me falling in love with this book. I enjoyed it but I didn't love it, it's not one I'll rush to reread any time soon. I just felt Meghan was a little lacklustre and, a week or so after finishing this book, I can't recall anything interesting about her that sets her apart from any other paranormal romance heroine - which is usually my main critique of the genre.

As I said before, Kagawa's writing is fantastic. She creates such a vivid and visual world for her characters that I could see every scene so clearly in my head, which made for a brilliant reading experience. Although I'm not keen on the vast majority of fairy books, this is a series I think I'll carry on reading - the writing completely drew me in and I'm keen to see how the story develops in The Iron Daughter.

First line: 'Ten years ago, on my sixth birthday, my father disappeared.'