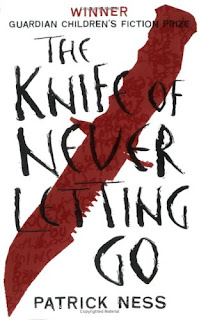 Published: November 3rd 2008, Walker Books
Pages: 479 pages, paperback
Series?: Yes, this is book one. The Ask and the Answer and Monsters of Men are books two and three
Acquired: Purchased myself

Summary (from Goodreads): Prentisstown isn't like other towns. Everyone can hear everyone else's thoughts in an overwhelming, never-ending stream of Noise. Just a month away from the birthday that will make him a man, Todd and his dog, Manchee - whose thoughts Todd can hear, too, whether he wants to or not - stumble upon an area of complete silence.

They find that in a town where privacy is impossible, something terrible has been hidden - a secret so awful that Todd and Manchee must run for their lives. But how do you escape when your pursuers can hear your every thought?

My review: So, this is one of those reviews that I have absolutely no idea how to write. Anything Chaos Walking related just turns my mind to mush. What I do know, though, is that The Knife of Never Letting Go is one of the best books I have ever read. Honestly. That's not something I'd say lightly as I don't rave about books very often. But this one, seriously, it's in a different league.

Dystopia has become a bit of a trend in YA at the moment, while some of it is great, some of it is not so good. The Knife of Never Letting Go is one of the first dystopia books I came across (long before it became a trend) and it's definitely the strongest I've ever read. The world Ness creates is so vivid, I haven't felt so engrossed in a different world since I read Harry Potter.

The characters here are fantastic. Todd and Viola are both so brilliantly well developed - I love that Todd is a flawed hero, struggling with his identity and the awkward transition of going from being a boy to a man. When it comes to light that everything Todd has grown up believing may actually be a lie he is thrown into complete turmoil. Who can he trust? Who is it who is lying to him? He feels completely alone and that feeling of isolation is definitely something we can all relate to, even though none of us have been in a situation quite as extreme as Todd's.

I want to give Manchee his own paragraph. Seriously, that dog. So sweet I swear to God he may have given me diabetes. Such a wonderful character and I'm a sucker for dogs as it is. He made me want to give my puppy a big fat hug.

The ideas explored in The Knife of Never Letting Go are so complex, I'm sure I'll be able to read this one over and over again and still take in more details that I missed before. How would you adapt if everyone around you could read your thoughts? How would you cope without any privacy? Life in Prentisstown is a truly terrifying thought and Mayor Prentiss, well he plain scared the crap out of me.

I could carry on raving about this book for a long time but instead I'll leave you with a visual representation of how this book made me feel throughout the entire time I was reading: 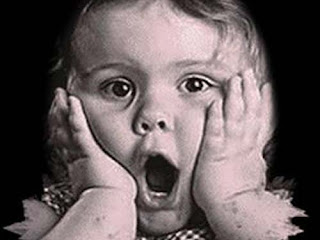 First line: 'The first thing you find out when yer dog learns to talk is that dogs don't got nothing much to say.' 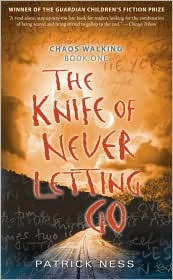 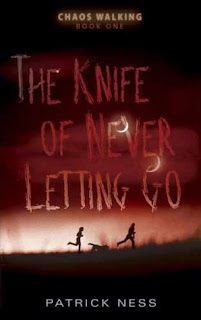 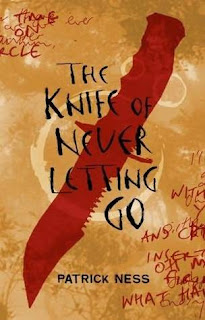