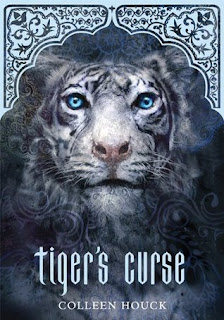 Published: May 26th 2011, Hodder & Stoughton
Pages: 498 pages, paperback
Series?: Yes, this is book one. Book two (Tiger's Quest) is out now
Acquired: Kindly sent for review by the publisher

Would you risk it all to change your destiny?

The last thing 17-year old Kelsey Hayes thought she’d be doing this summer was trying to break a 300-year-old Indian curse. With a mysterious white tiger named Ren. Halfway around the world. But that’s exactly what happened.

Face-to-face with dark forces, spellbinding magic, and mystical worlds where nothing is what it seems, Kelsey risks everything to piece together an ancient prophecy that could break the curse forever.

My review: Now, Tiger's Curse is not the kind of book I'd normally pick up. A girl attempting to break a 300 year old curse, with a tiger as a sidekick? Yeah, not my kind of thing. However, the story of this series' publication is fascinating (Google it) and the early reviews were glowing, so I decided to take a look.

The world building in Tiger's Curse is just great, the mythology is so rich and I loved finding out the history behind the curse. The vast majority of the action is set in India, which I think was a risky move as one detail out of place could have ruined the story. When an author decides to set a novel in a country as culturally rich and exciting as India the description needs to be spot on - luckily it was in this case. It's clear that Houck did her research and every detail rings true, which makes for a great reading experience.

The pace in Tiger's Curse did have some problems, for me, and I think the beginning was a little slow. It did take me a good few chapters to settle into the story and it did drag somewhat in the middle - this is a chunky book so don't expect to get through it in a single sitting. However, once the action really picked up (in the final third, I'd say) I was completely engrossed until the end, which I loved, by the way.

Tiger's Curse is a truly unique novel with a wonderful story behind it and I can really see this series becoming a huge hit. Finally, I just have to add that the cover art is absolutely beautiful!

First line: 'The prisoner stood with his hands tied in front of him, tired, beaten, and filthy but with a proud back befitting his royal Indian heritage.'