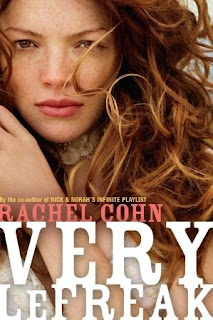 Summary (from Goodreads): Very LeFreak has a problem: she's a crazed technology addict. Very can't get enough of her iPhone, laptop, IMs, text messages, whatever. If there's an chance the incoming message, call, text, or photo might be from her super-secret online crush, she's going to answer, no matter what.

Nothing is too important: sleep, friends in mid-conversation, class, a meeting with the dean about academic probation. Soon enough, though, this obsession costs Very everything and everyone. Can she learn to block out the noise so she can finally hear her heart?

From acclaimed author Rachel Cohn comes a funny, touching, and surely recognizable story about a girl and the technology habit that threatens everything.

My review: Hmm. Where to start with this review. Honestly, I was so disappointed with Very LeFreak. I first read about this book last year when it was released and instantly wanted to read it. The cover, the synopsis, it completely drew me in and I couldn't wait to get a copy. When I finally got around to ordering it I dived straight in, convinced that I would love it. Unfortunately, that wasn't the case.

You all know how disappointing it is to be so excited about a book but then not enjoy it at all. From page one I found the writing to be clunky and a little awkward. Please see the below quotation as an example, which runs as a single sentence:

'Hey, she wasn't even bothered that yesterday she'd been fired from her work-study "security" job checking student IDs - a feat that, contrary to her university career services advisor, was not, like, impossible to pull of - yet Very probably could be counted on later today to blow the remaining credit on her maxed-out card for primary wants like new headphones rather than for secondary needs such as food and tuition.'

Okay, so I know that's not a horrendously structured sentence (it's just one I picked from page one) but I don't think a reader should ever have to reread a sentence to get it to make sense. I found myself having to skip back and reread passages continually, which constantly interrupted the flow of the story and stopped me getting as involved as I wanted to be.

Writing aside, another issue I had was with the characters in the novel. Very herself was extremely unlikable - I do get that she's supposed to be cold and a bit detatched and normally I like a bitchy protagonist but I just couldn't warm to her. She was horrible. I know that in the later scenes where she talks about her issues at ESCAPE I should have felt bad for her but I couldn't - she lies so much in the story that by that stage I didn't know if anything she said was the truth. I don't know, I didn't like her. She did too many cruel things that I don't think can easily be explained away by a person having a bad childhood - everybody has things happen to them that they can use as an excuse for bad behaviour but it doesn't cut it with me. *Rant over*

Oh, and the Lavinia thing felt a bit shoe horned in to me - the foreshadowing throughout the story was not subtle at all so I knew what was coming chapters before it happened. And the El Virus revelation? Yeah, that too.

One other thing - the swearing. Okay, I am not offended by swearing in the SLIGHTEST. I think most YA books should have more swearing, to be honest - I think swearing is all well and good and can help depict a realistic teenage/YA voice. However, Very's swearing felt completely gratuitous to me and I was really disappointed as it just seemed as though it had been put in there to try and make the book seem a bit more edgy - something I really, really hate.

And so ends my review of Very LeFreak. I'm so disappointed that I didn't love this one as I really wanted to. I will admit that I did enjoy the book more in the second half but I just don't think the writing or characterisation was up to scratch, at all. What's interesting is that Cohn mentioned it was her first novel, not her first novel published but the first one she wrote. Of course it's been edited plenty of times since then but I wonder if that's why it felt quite weak, to me anyway. I've heard so many great things about her books that I definitely won't let Very LeFreak put me off of her other books and I'm keen to try her collaborations with David Levithan in the near future.

First line: 'It wasn't the fact that Starbucks did not - would not - serve Guinness with a raw egg followed by an espresso chaser that was ruining Very's hangover.'