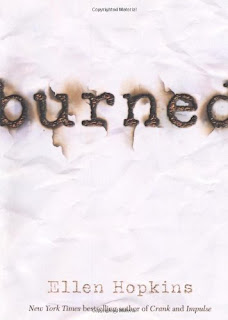 Summary (from Goodreads): Raised in a religious -- yet abusive -- family, Pattyn Von Stratten starts asking questions -- about God, a woman's role, sex, love. She experiences the first stirrings of passion, but when her father catches her in a compromising position, events spiral out of control.

Pattyn is sent to live with an aunt in the wilds of Nevada to find salvation and redemption. What she finds instead is love and acceptance -- until she realizes that her old demons will not let her go.

My review: As most of you know I'm a huge Ellen Hopkins fan and am gradually working my way through her books. The way she deals with such complex issues without ever being patronising or overly preachy is something I love. That, and her beautiful way with words.

From the outset Burned felt a little different to the other novels I've read by Hopkins. It felt little more hopeful and the romance was an important part of the story, something that I haven't particularly noticed in the other books of hers that I've read. I've always been impressed that she can write such successful YA books without the need for romance but the love story in Burned was welcome and important to the book.

Pattyn, our heroine, is a brilliant character. I absolutely bonded with her from page one and her situation was so horrible that I was worried the whole way through the story about the ending. As any of you who have read Hopkins' books before - she isn't exactly a fan of Hollywood endings! Although, one of the things I most admire about her is that she's always realistic. Of course, it's frustrating and sad when bad things happen to your favourite characters but, unfortunately, that's life. Everything she writes is real and I really appreciate that.

I originally did think Burned was a standalone and I think it works great on its own. However, I recently discovered that there's a sequel (Smoke), which is due out in 2013. I'm not sure where Hopkins can possibly go in a second installment but I'll definitely be reading it. At times Burned is difficult to read because of the subject matter but I urge you to give it a go, it's a really beautiful book.

First line: ‘Did you ever,
When you were little, endure
Your parents’ warnings, then wait
For them to leave the room,
Pry loose protective covers
And consider inserting some mental
Object into an electrical outlet?’

Read if you liked…: Grace – Morris Gleitzman (for theme only, Burned is much more mature in terms of tone and content)