Is there anything cosier than being wrapped up in bed when it’s pouring down with rain outside?

Right now we’re having some biblical rain in my little village. I can see people looking out of their windows and taking photos. There’s thunder and black clouds and the rain is coming down crazy fast. Considering it was sunny five minutes ago it’s all a bit dramatic.

My boyfriend’s dedicating his day to whipping up a big batch of chilli jam, which means I have four whole hours of uninterrupted writing time. Bliss.

I’ve been getting on so well with Reckless over the last week (YA summer camp/gap year novel). My word count was 13,000 on Thursday and now it’s just under 25,000. Progress! I don’t know, something seems to have clicked into place and the words are flowing. It’s a great feeling, especially after I nearly shelved this one to force myself into getting The Seven Gates of Hell (YA horror) ready to pitch. I think I was putting too much pressure on myself to get something out to agents. I didn’t feel ready but I’d given myself this deadline that I tried to make myself stick to. Now I’ve given myself a bit more freedom I’m doing so much better.

I’d really love to fully finish the first draft of Reckless before I go to Florida at the beginning of October. I think it’s doable, as long as I work hard and it would be a great thing to celebrate on holiday. 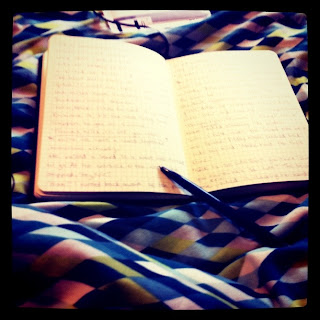 It’s funny, isn’t it, how all of a sudden you just can’t get the words out fast enough. Every time I have to dedicate my attention to something else I’m itching to get back to my notebooks.

That’s the main thing I’ve done differently this time around and I’ve noticed a huge difference. Instead of typing everything out I’ve been writing by hand and it’s been a bit of a revelation if I’m honest. I’m not concerned with word counts and the number of pages, it’s only the characters and scenes that matter and I really don’t think I’ll go back to typing a first draft. It’s nice to flick through a notebook and see it filled with my words. I’ve almost got through a 200 page notebook this week, which is a nice achievement.

So, yes, it’s tipping it down outside but I’m curled up in bed with Ed Sheeran on repeat (he is definitely a big part of the soundtrack to Reckless) and I couldn’t be feel more inspired.

I’ll keep you guys updated with my Reckless progress as it develops. I think I’m definitely going to start blogging a lot more about my writing. I keep saying I will but it’s only now I feel comfortable to talk about it. Maybe it’s because I feel so much happier with Reckless than I did with TSGOH, which I am going to spend time working on later in the year, I promise. I know it has the capacity to be a great story but it needs a hell of a lot of polishing and I think I need to develop more as a writer before I can really do it justice.

Anyway – I hope you all have a lovely day and enjoy the rest of the weekend.