Hi everyone! I'm here today as part of the blog tour for the fantastic Velvet by Mary Hooper. I read this one recently and loved it so I'm thrilled to be part of the tour. See below for a great guest post, where Mary talks all about her favourite Victorian celebrities!

Do make sure you drop by to visit Teenage Fiction for All Ages tomorrow for the next stop of the tour and if you want to catch up with the earlier tour stops then you can start over at Wondrous Reads. For the full schedule check out the banner below.

Without further ado I'll hand you over to the brilliant Mary Hooper... I should start with Dickens, I suppose, the most famous Victorian celebrity of them all. And although he is definitely my favourite Victorian writer, he is certainly not my favourite Victorian person, because he ousted his long-suffering wife, Catherine, who had borne him ten children, for an actress half his age. He also forbade his wife to contact any of the children. Of course, this doesn’t affect his fictional output, which is universally lauded, or the fact that some of his writings helped highlight – and change - the terrible conditions of the poor.

Oscar Wilde: generally thought to be the greatest wit of the age. He wore a blue carnation in his buttonhole, his clothes were audacious and his manner affected (he was the man who, when asked at Customs if he had anything to declare, replied, “Only my genius”). His clever and funny plays, including “The Importance of Being Ernest” are still performed all over the world.

Dante Gabriel Rosetti was the founder of the Pre-Raphaelite Movement, a loose collection of artists who tried to achieve a return to the simplicity and bright colours of medieval paintings. Talented and sensuous, he caused a sensation with his bohemian way of life and his “stunners”: the beautiful girls he took as his models. Notable for the fact that he had a miniature zoo in his home in Chelsea with small animals which ran along the dining table (okay, this was not very hygienic) and because, after burying an unpublished set of poems in his wife’s coffin, he later changed his mind, had the body exhumed and removed them.

If we’re having Rosetti, then we must have William Morris, who started as a member of the Pre-Raphaelite Brotherhood but branched out to become craftsman, Socialist, designer, poet, architect and founder-member of the fine art workshop, Morris & Co. His life was ruled by a dislike of industrial ugliness; he coined the often-repeated phrase, “Have nothing in your homes which you do not know to be useful or believe to be beautiful.” Sadly, he lost his beautiful wife Janey Morris to the more obvious charms of Rosetti.

The Bronte Sisters. Three celebrities for the price of one here, Charlotte (Jane Eyre), Emily (Wuthering Heights) and Anne (The Tenant of Wildfell Hall), to name just one book from each sister. When I read the first two in my Eng Lit class, I remember there being long and heated discussions over which was the better book, Jane Eyre or Wuthering Heights? I’m in the Wuthering Heights camp myself; I love all that murky gothic/romantic passion.

Just to even up the male/female split a little more, my last Celebrity (and a true A-lister) is Lily Langtree, politely known as a “courtesan” (she was mistress to the heir to the throne). Stunningly beautiful, she embarked upon a stage career and had many wealthy and influential lovers. She made a name for herself in thoroughbred racing, managed a theatre and even sued a chop-house in New York for their gentlemen-only seating policy. Long after her death in 1929 she became the subject of The Who’s song, “Pictures of Lily”. 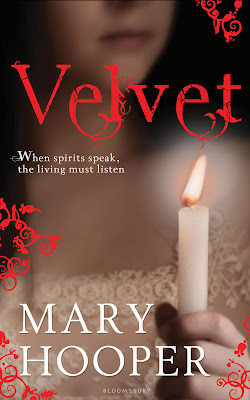 Brilliant, brilliant! For more information on Velvet and Mary Hooper herself head over to her Facebook page and website. Make sure you look out for Velvet, it's a real treat!
Posted by CarlyB at 08:00