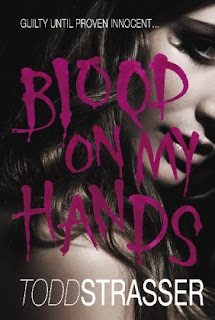 Published: April 4th 2011, Walker
Pages: 301 pages, paperback
Series/standalone?: Series, this is book two. Book one (Wish You Were Dead) is out now
Acquired: Kindly sent for review by the publisher

Summary (from Goodreads): A powerful and uncompromising thriller – not for the faint-hearted.

Some girls are glamorous, beautiful … and deadly. Found kneeling by a dead body, with a bloody knife in her hand can only mean Callie Carson is guilty of the brutal murder of Katherine Remington – can’t it? Joining the in-crowd is tough; leaving is a killer.

My review: Blood on My Hands is the first one of Todd Strasser's novels that I've ever read and I'm now a fully converted fan. I'll definitely be checking out more of his work in the future because I enjoyed Blood on My Hands so much. It's such a fast paced, exciting book and I read it in a single afternoon, feeling absolutely exhilirated from beginning to end.

I love that Strasser drops us in right in the middle of the action so there's no slow scene setting here. The pace doesn't dip at any point, it's go go go right from page one and I really enjoyed that. I really appreciated the fact that Strasser used tension to scare us and make the story so jumpy, rather than gratuitous gore, which was barely present at all.

The murder mystery element of Blood on My Hands was so much fun and I really loved trying to figure out who the murderer was - of course, I was wrong. Although with this book I think most readers would find it hard to work out who the murderer was and the reveal really was shocking. Do not be tempted to skip to the end - don't ruin things for yourself!

I actually had no idea that this was the second book in a trilogy until after I'd finished reading Blood on My Hands and I think it worked perfectly as a standalone - though now I really want to check out Wish You Were Dead, simply because I enjoyed this one so much. I'd be interested to see what those of you thought who'd already read book one, so do let me know in the comments.

First line: 'In the dark woods behind the baseball dugout, I'm kneeling next to Katherine's body, my heart racing, my breaths shallow and fast, my emotions reeling crazily at the sight on the ground before me.'