Mini Reviews: The 10pm Question, Lottie Biggs is Not Tragic, A Most Improper Magick and The Adventures of the New Cut Gang

So I like to try and stay up to date with the books I’m sent for review so I’ve decided to write a collection of mini reviews to be posted each week to help me keep up to date. This week I’m featuring mini reviews of The 10p.m. Question (Kate de Goldi), Lottie Biggs is Not Tragic (Hayley Long), A Most Improper Magick (Stephanie Burgis), The Adventures of the New Cut Gang (Philip Pullman). 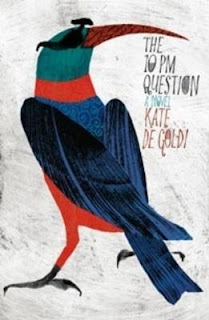 Published: 2008, Templar
Acquired: Kindly sent for review by the publisher

Summary (from Goodreads): Frankie Parsons is twelve going on old man: an apparently sensible, talented Year 8 student with a drumbeat of worrying questions steadily gaining volume in his head: Are the smoke alarm batteries flat? Does the cat, and therefore the rest of the family, have worms? Is the kidney-shaped spot on his chest actually a galloping cancer?

Most of the significant people in Frankie's world - his father, his brother and sister, his great-aunts, his best friend Gigs - seem gloriously untroubled by worry. Only Ma takes seriously his catalogue of persistent anxieties; only Ma listens patiently to his 10pm queries. But of course, it is Ma who is the cause of the most worrying question of all, the one that Frankie can never bring himself to ask.

Then the new girl arrives at school and has questions of her own: relentless, unavoidable questions. So begins the unravelling of Frankie Parson's carefully controlled world. So begins the painful business of fronting up to the unpalatable: the ultimate 10pm question.

My review: I'm really happy that I took a chance on this novel as it was a gamble that truly paid off. I hadn't heard much about The 10p.m. Question but the premise really grabbed me and I'll admit I was drawn to the cover just a little bit - but look, so pretty!

The writing in The 10p.m. Question is absolutely exquisite and it really reminded me of The Curious Incident of the Dog in the Night Time - I know pretty much every review of this book says that but it's true. The overall tone and the whimsical quality to the prose just felt similar, though the content is quite different.

This is a really lovely book, my emotions ran high the whole time I was reading it but I felt content and happy and like I wanted to hug everybody in my family by the time I was finished. A novel to make you think. And smile. 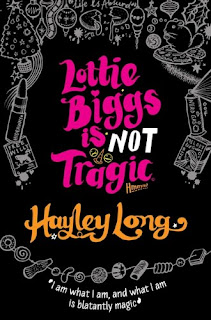 Summary (from Goodreads): Just when things were starting to look up for Lottie her life's gone a bit pear-shaped, wonk-ways and downside up again. Her mum's all soppy over a bloke with a horrible shemo daughter, her best pal Goose has disappeared in a cloud of nerd-gas and Lottie's in the midst of an existential crisis.

There's only one thing to do - get the hell out of Cardiff and go on the road with the gorgeous Gareth Stingecombe (and his manly thighs). But things don't go to plan, and Lottie starts to realise she might have been a bit me me me lately...a female emo, obviously The wit of Louise Rennison meets the depth of Jacqueline Wilson.

My review: I read and reviewed Lottie Biggs is Not Desperate here at Writing from the Tub last year and really enjoyed it. I said that it's a book best enjoyed alongside a cupcake and a glass of booze - funnily enough I did actually read this one while I had a glass of wine, hooray for taking my own advice.

The characters we know and love from Lottie Biggs is Not Desperate are back in this installment and, once again, I found myself laughing out loud at the scrapes and scandals that Lottie gets herself into. She's such a likable character and I definitely see parts of my younger self in her overdramatics and love crises.

The Lottie Biggs books are so much fun and I genuinely enjoy reading them. They make me laugh but they also have a certain amount of depth to them, especially Lottie Biggs is Not Tragic. I'm sure you'll all recognise the teenage dramas that you went through yourself when you read this one. Once again, another hit for Hayley Long.

A Most Improper Magick - Stephanie Burgis

Summary (from Goodreads): "I was twelve years of age when I chopped off my hair, dressed as a boy, and set off to save my family from impending ruin.

"I made it almost to the end of my front garden..."

Magic may be the greatest scandal in Regency England. But that's not going to stop Kat Stephenson when there are highwaymen to foil, sinister aristocrats to defeat...and true loves to capture for her two older sisters.

My review: I'm not generally a huge fan of anything set pre-1980 but I actually really enjoyed A Most Improper Magick. Burgis really brings Regency England to life with tiny little details that I loved and she does a wonderful job with Kat and her family, who I immediately liked (Kat, that is - not all members of the family are so pleasant!).

The main thing that shines through in this novel is how much Kat cares about her family, which is something Burgis gets across extremely well. I especially loved the ending of this one, which sets things up perfectly for book number two without being frustrating or too much of a cliff hanger.

I read A Most Improper Magick with a huge smile on my face and it left me with a warm and fuzzy feeling - I can't wait to read the other books in the series now. This is an absolutely perfect MG novel and I'll definitely be recommending it to younger readers, though from all of the 5* reviews on Goodreads it's clear a lot of older readers are huge fans too!

The Adventures of the New Cut Gang - Philip Pullman 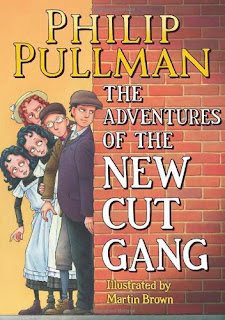 In Thunderbolt's Waxwork, someone is passing counterfeit coins and suspicion falls on none other than Thunderbolt's dad. In the Gas-Fitter's Ball, the silver collection of the Worshipful Company of Gas-Fitters is stolen. With a little help from some colourful accomplices, the New Cut Gang is soon hot on the criminals' trail.

My review: Are there any readers out there who aren't huge Philip Pullman fans? It seems as though everybody out there is a huge fan of the storyteller supremo himself and I'm absolutely no exception. I was so excited to sink my teeth into this two-part collection and I was hooked from beginning to end. The Adventures of the New Cut Gang is Pullman at his best and these stories are going to appeal to generation after generation.

I was lucky enough to receive a hardback edition of these two stories and it's such a beautiful book, the illustrations are amazing and really bring the stories to life - bravo Martin Brown. Another gem from Philip Pullman but then who would expect anything less?

Labels: A Most Improper Magick, Lottie Biggs is Not Tragic, Mini reviews, The 10pm Question, The Adventures of the New Cut Gang