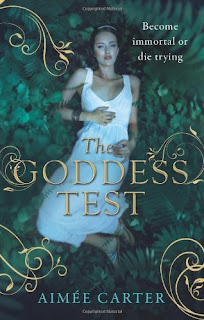 Published: September 16th 2011, Mira Books
Pages: 304 pages, paperback
Series/standalone?: Series, this is book one. Book two (Goddess, Interrupted) is due out in 2012
Acquired: Kindly sent for review by the publisher

Summary (from Goodreads): It's always been just Kate and her mom - and her mother is dying. Her last wish? To move back to her childhood home. So Kate's going to start at a new school with no friends, no other family and the fear that her mother won't live past the fall.

Then she meets Henry. Dark. Tortured. And mesmerizing. He claims to be Hades, god of the Underworld - and if she accepts his bargain, he'll keep her mother alive while Kate tries to pass seven tests. Kate is sure he's crazy - until she sees him bring a girl back from the dead. Now saving her mother seems crazily possible. If she succeeds she'll become Henry's future bride, and a goddess.

My review: So it seems Greek mythology is branching off from paranormal romance to become its own little trend, doesn't it? I did actually find The Goddess Test to be one of the more original novels focusing on Greek mythology that I've come across this year. There were a whole host of delectable twists and turns that really kept me gripped and I enjoyed how much darker in tone it was than a lot of YA novels we're seeing at the moment. It reminded me a little of Fury, in tone rather than content and it felt as though Carter wasn't afraid to 'go there', so to speak. Plot-wise, The Goddess Test is an absolute winner...unfortunately, not all elements of the book are quite so great.

In terms of gods and goddesses The Goddess Test focuses mainly on evil overlord, Hades. I'm sure we'll be introduced to more gods and goddesses as the series progresses but Hades (or Henry) was the main attraction this time around. I think the first problem is that he's called Henry. I'll admit, off hand I can't think of anything that could have been used as a replacement but Henry is possible one of the least intimidating names in the English language. Hades is a bad ass, when it all boils down, he's evil and vindictive and...just not a Henry.

Henry reminds me of a sweet old gentleman who wears a flat cap and owns a wiry little West Highland Terrier. Henry is somebody who takes three Rich Tea biscuits instead of two and likes nothing more than a good roast dinner and episode of Heartbeat on a Sunday afternoon. That's my idea of somebody called Henry, which may explain why I didn't find many parallels between the male lead in The Goddess Test and the infamous lord of the underworld.

Of course, this is completely my personal taste and I'm sure most of you won't have had any issue with the name but it really did put me off and I think it goes to show how important naming characters can be. Did anybody else have similar thoughts, or have you had similar thoughts with any other characters in different books?

My second issue with Henry is that he really is a bit of a drip. A proper emo through and through I wanted to sock him round the chops and tell him to grow a pair. Honestly, a little bit of charisma and panache would have done this kid wonders.

However, where Henry failed me Kate shone through as a really likeable and whole character. The situation with her mother is what made me warm to her so much and I couldn't help but find myself thinking what I would do if I was in her situation (answer: anything). Oh, also, while we're on the topic of characters - my favourite was Ava. I do love a mean girl and the bitchier the better; Ava was great and I really wish she'd had more page time and she provided some of the most entertaining moments, for me at least.

I really got into The Goddess Test when Kate began her seven tests - I won't give anything away but the theme of the tests it's something I'm really, really interested by (it's a theme that I love to see crop up in novels) so when I realised that I did a little cheer inside. This is where the pace really began to pick up and I raced through to the end of the novel from this point - I did find the beginning dragged a little but the ending certainly made up for the slight pacing issues.

It is clear that The Goddess Test is a first installment and I'm not sure how well it stands individually but I think Carter did a great job of setting the scene for the next two books in the series, which I'll definitely be checking out when they're released next year. Definitely worth a read.

First line: "How did it happen this time?"

And now... A quick Q&A with the writer herself, Aimee Carter:
In young adult fiction in particular, it’s important that readers bond with the characters - what do you think is the most important thing to get right when you're creating a character?

- It all depends what I want to do with that character. For a love interest, they have to have qualities that a reader could fall for or find enchanting. For a protagonist, someone with enough gumption to be an active participant in his/her story is important, as well as being someone that the reader will root for and possibly relate to. For all characters, motivation is extremely important, and I find that it’s easiest to write characters who know what they want and are actively going for it.

Which scene did you find most difficult to write in The Goddess Test?

–The ending was the most difficult for me – ending a book is hard enough, but I struggled to find an ending that would tie everything up. I went through several before settling on the one you see in the story.

The YA book market is a competitive place, what do you think sets The Goddess Test apart from the pack?

– I honestly have no idea. I just write the stories I would want to read, and I don’t consciously think ‘this must be unique.’ Though looking at the end result, so much of YA fiction right now is about a girl instantly falling for a hot guy who happens to be her soul mate. Kate resists Henry for a long time, and she’s not taking part in the tests to be with him – she’s doing it to gain more time with her mother. A lot of reviewers point that out as something that separates TGT from other books out there, so perhaps that’s a better answer. (Note from Carly: I noticed that - it's a nice change!)

- Sadly I only listen to music while I’m writing to drown out the noise around me. Usually it’s one single song on repeat for hours at a time. Sometimes it fits the mood, other times it’s loud and fast enough to drown out a particularly loud conversation nearby. I do listen to a lot of late 90s music though – Savage Garden, Natalie Imbruglia, etc.

Can you tell me a bit about your journey with The Goddess Test? When did you first come up with the idea and what were the timescales involved between the first draft and the novel being accepted for publication?

– The idea sort of marinated in the back of my mind for many, many years, ever since I’d first heard the myth of Hades and Persephone as a child. It wasn’t until I was in my late teens or early twenties that I really started to focus on that idea, and different elements came to me at different stages – I knew Hades would be a character.

It took me a while to figure out what role, if any, Persephone played. At first I thought Kate would be trading places with a younger sister, but as it evolved, I came up with the idea of a sick mother. That was actually one of the last plot points that clicked into place, and from then on out, it was a matter of figuring out how they all fit together.

As for the timeline on writing the book, I worked on the outline for over a year, going back to it between other projects to tweak it, until finally I sat down one summer and wrote it. I landed an agent fairly quickly, but it took another year and several rewrites before we found a home for it. It was definitely a long, but extremely satisfying process.