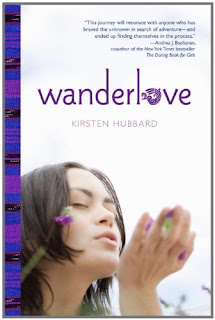 Summary (from Goodreads): It all begins with a stupid question: Are you a Global Vagabond?

No, but 18-year-old Bria Sandoval wants to be. In a quest for independence, her neglected art, and no-strings-attached hookups, she signs up for a guided tour of Central America—the wrong one. Middle-aged tourists with fanny packs are hardly the key to self-rediscovery.

When Bria meets Rowan, devoted backpacker and dive instructor, and his outspokenly humanitarian sister Starling, she seizes the chance to ditch her group and join them off the beaten path. Bria's a good girl trying to go bad. Rowan's a bad boy trying to stay good.

As they travel across a panorama of Mayan villages, remote Belizean islands, and hostels plagued with jungle beasties, they discover what they've got in common: both seek to leave behind the old versions of themselves. And the secret to escaping the past, Rowan’s found, is to keep moving forward. But Bria comes to realize she can't run forever, no matter what Rowan says. If she ever wants the courage to fall for someone worthwhile, she has to start looking back.

My review: Wanderlove is an interesting book that looks set to be a huge hit in 2012. I'm not sure that my own personal opinion is that it's a massive hit but if you take a look at the existing reviews and ratings on Goodreads (which I find are generally an indicator of how popular the book will be commercially) Wanderlove is one popular book.

I read this one in one sitting on my flight to Florida a couple of weeks ago. It had been sitting on my Kindle for a few weeks (since I obtained a review copy from Netgalley) and I knew it was about travelling, so I thought it would be the perfect book to start my holiday with. Of course, as I was flying to Florida rather than an obscure village that very few tourists ever make it to, most of the characters in Wanderlove would deem me a 'Spring Breakpacker' and probably laugh at my non-hemp based outfit but still.

I'll start with the bad and get that out of the way first, as the good does outweigh the bad in this one. Now, as anybody who knows me 'in real life' knows - I hate anything pretentious. I hate people who try to be so quirky and edgy it hurts. Unfortunately I did find the general tone in the first half of Wanderlove to be a little bit pretentious at times. As in: If you don't backpack the 'right way' we're going to laugh at you and your clothes and your tour group and take the piss out of the way you holiday. It irritated me a lot, actually; probably because I know people like that in real life and they're complete douche bags.

I wanted to quote the passage that annoyed me so much to see if anybody else took it the same way I did, however, as this is a review copy I'll have to wait to see the finished book to see if that passage made it in. I really hope it didn't. Anyway, I'll move on from the bad now and go ahead and focus on the good.

It's obvious that Hubbard knows her subject matter here and the fact that she's a travel writer who's spent time in Belize really shines through and makes the book feel authentic. The accompanying illustrations are all drawn by the writer herself and they're gorgeous, they really help to make the story feel more like a travel journal than a novel and I'm looking forward to seeing them on the page, rather than just on the screen of my Kindle.

For one of my dissertations at university I wrote a YA travel novel and through my research for that it became clear that there really aren't a lot of well written YA travel novels at all, so I was really pleased that Wanderlove is so well written and will stand up for an under-represented genre.

The second half of Wanderlove is infinitely better than the first half (think Insidious, only the other way around) and I'm so glad I stuck with this one or I could have missed out on a really great book. I'm interested to reread the finished book when it's released to see if any changes have been made, as I'd love to see the first half match how great the second half is. The final couple of chapters did make me look back at the first few in a new light and think maybe the statements that pissed me off were put in intentionally - as we see how Bria has grown through the story we also see how some of the characters aren't quite as edgy and free-spirited as she first thought. I'm sorry that's a little vague but I don't want to name any names or go into spoiler territory.

My one grumble aside, Wanderlove is a unique, beautifully written novel that will make you want to grab your passport and set off on the trip of a life time.

Oh, and I'm sorry this review is a bit incoherent and sketchy but I'm still absolutely knackered from my holiday!