Hello folks! Today is my stop on the blog tour for Michael Gerard Bauer (an action hero name if ever I heard one) and his brilliant YA book, Don't Call Me Ishmael. I asked Michael a few questions about music and how it influences his writing process - have a look below to see what he had to say.

I do host quite a lot of guest posts here at Writing from the Tub but this is definitely one of my favourites. I found myself laughing out loud at some of Michael's responses and it was fascinating to read about the part music has played in his writing life, especially when it comes to the sequel to Don't Call Me Ishmael.

Now I'll hand you over to Michael, while I scurry off to listen to some Bob Dylan! 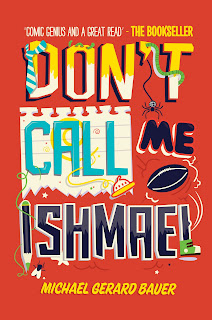 Hi from Brisbane, Australia and thanks so much for inviting me into The Tub!

Do you listen to music when you are writing or plotting?

Music has always been a big part of my life. I love music. I play guitar (badly) and sing (even worse) and have tried to write my own songs (head for the hills!). When I was in my late teens and early twenties I had dreams of being a singer-songwriter like Bob Dylan and my early writing influences probably derive more from songwriters than novelists.

So obviously the answer to the question, Do you listen to music when you’re writing or plotting? is … ‘No way!’

I tried once, but I couldn’t do it. I just ended up listening to the songs. Maybe I like music too much to have it on as just a background thing? Maybe I chose the wrong songs to play? Maybe I just can’t multi-task? Maybe I’m too easily distracted? Ooooh look, four questions in a row! What was I talking about again? 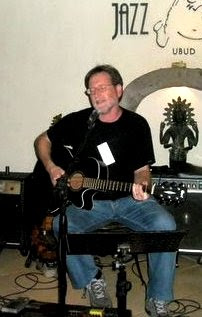 Do certain songs inspire you?

I may not be able to write along to music but there are many songs that inspire me. I would love to be able to capture the mood and feeling of some of my favourite songs particularly in a serious novel. I think playing these songs before I write might work for me. Jackson Browne’s beautiful song Sky Blue and Black is one I might choose. http://youtu.be/Fz_sOnO9D24

Does Don’t Call Me Ishmael have a theme song or playlist?

Don’t Call Me Ishmael doesn’t really have a theme song or playlist but music plays an important part in the series. Ishmael’s dad is an ex-member of a short lived cult rock band from the 80s called The Dugongs. He’s also a big Beatles and Bob Dylan fan (a bit like someone else I know).

In fact in the sequel to Don’t Call Me Ishmael not only do we find out that Ishmael’s sister Prue gets her name from the Beatles’ song Dear Prudence, but also that Ishmael’s dad believes that the Beatles were responsible for turning Prue into a near-genius and also saving her life!

So I‘m thinking now that maybe it should have a Beatle’s playlist?

For Ishmael’s battles with bully Barry Bagsley – Help!
For his love for Kelly Faulkner – Something or I’ve Got To Get You Into My Life.
For his struggles with Ishmael Leseur’s Syndrome – I’m a Loser or Carry That Weight.
And for his fear of speaking in public and maybe the over all theme song for the book – I Get By With A Little Help From My Friends.

Music becomes even more central to the second Ishmael book. The sequel really does have its own built-in playlist because the nine sections of the story are introduced by lyrics from nine Dugong’s.

On the German audio version of Ishmael 2, a Hamburg band called Gone Fishin’ played and recorded the songs (in English) that I wrote for the book. Amazingly, in 2010, I got to play all those songs with the band live on stage at the White Ravens Children’s Literature Festival in Munich.

It was one of the highlights of my life to be in a band and play songs I had written. For a brief moment there I finally became the singer-songwriter I dreamed of being when I was young. The American author John Green (Saving Alaska, Paper Towns) was also at the Festival and he features a bit of the concert at the end of one of his famous vlogbrothers videos: http://youtu.be/rTzsShHWGPE. 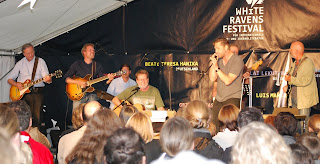 You know, with all this musical influence coming from his dad, it wouldn’t surprise me if sometime in the not-too-distant future, Ishmael and the Razzman and the rest of his mad mates ended up forming their own rock band. Now that would be something to read about!

Thanks once again to Writing From The Tub for the great topic and for allowing me to chat with your fabulous readers.

Cheers from Down Under!
Michael

For more information about Michael and his work you can visit his blog or Facebook page.
Posted by CarlyB at 07:00