Blog Tour: The Future of Us - Jay Asher and Carolyn Mackler

Morning all - Friday at last, phew! Hope you all made it through the first working week of 2012 unscathed. Today is my stop on the Future of Us blog tour and I've got a joint interview with authors Jay Asher and Carolyn Mackler as a lovely end of week treat. 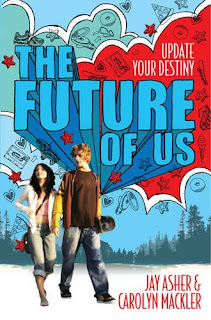 In young adult fiction in particular, it’s important that readers bond with the characters and both Josh and Emma are so likeable from the outset - what do you think is the most important thing to get right when you're creating a character?

CM: I think it’s key to create real characters who have personalities and quirks and fears and things they’re proud of. I like to know my characters’ backstories while I’m writing, even if most of the things I know never make it into the novel.

JA: Dialogue is the main way I get to know characters. Each character should use language a little differently (sarcastic, meandering, etc…). The way a character speaks tells a lot about who they really are. With this novel, Carolyn would occasionally have a character say something in a different way than I’d have written it, but it made me see the character in a way I hadn’t thought about. And I know I did the same for her, which made the characters become richer and constantly surprise us.

When reading for pleasure do you prefer to read standalones or series? Why?

JA: I’m always reluctant to pick up a series book. There are way too many books that I haven’t had time to read yet, and I’d rather get through a bunch of individual books than commit myself to several books about the same characters.

CM: Definitely standalones. Aside from Harry Potter, I’ve generally stayed away from series. I’m too impatient. I want to know the full arc of the story as I’m reading THAT novel, not wait a year or two to see where the narrative is going.

The setting for The Future of Us felt very authentic (as a 90s kid I adored the Dave Matthews Band references), what sort of research did you have to do for the novel? How did you go about doing this?

CM: Mostly, Jay and I talked about our experiences in the 90s, what music we listened to, when we first went on the internet, what people thought about cell phones back then. And Google definitely helped, like if we were trying to find the accurate television line-up for May 1996, or see a picture of a cell phone from that era.

JA: It was fun to find those opportunities to sprinkle in 90s references, but we always kept in mind that most of our readers probably weren’t even born in 1996. So we wanted the book to have that authentic mid-90s feel, but also make sure a teen from today would understand it all within the context of the story.

The YA book market is a competitive place, what do you think sets The Future of Us apart from the pack?

JA: This is exactly the type of book I would’ve wanted to read at that age. It deals with friendship, love, who we become, and who we are, all within a fast-paced and fun story. The Future of Us may not fit into any of the big current trends, but everyone loves a well-told story with a big hook!

CM: What I love about The Future of Us is that it’s fun and gripping and really suspenseful. But it also speaks to everyone’s curiosity about where their lives will be like in fifteen years, and how they’d change their day-to-day if they knew how their futures turned out.

Some writers take great inspiration from music while they’re writing. Do either of you listen to music while you’re writing? If so, what artists/bands do you like to listen to while you write?

JA: I’ll often listen to a few songs before I write a scene to set a certain mood, and this book involved lots of Green Day and Alanis. But when I actually write, often at a coffee shop, I don’t listen to anything. Whatever’s playing in the coffee shop, along with the people talking around me, blends into the background noise.

CM: I need total silence while I’m writing, but as Jay and I were working on The Future of Us (and when I was NOT writing), I tuned into some Dave Matthews and Joan Osborne and Green Day to get in the 90s mood.

Can you tell me a bit about your journey with The Future of Us? When did you first come up with the idea and what were the timescales involved between the first draft and the novel being accepted for publication? Did you always set out to write the book together or is that something that came later?

CM: About a year and a half ago, I decided I wanted to write a collaborative novel. I immediately thought of Jay as the ideal co-author. We barely knew each other, but I was a big fan of his first novel, Thirteen Reasons Why, and I felt we had similar realistic fiction sensibilities. So I sent him an email and said, “I have a semi-crazy idea to run by you.”

JA: We began brainstorming ideas in early April, then turned in our first draft in early December (the very day my wife went into labor with our first child). There was a short break during the holidays, and then we had about five very intense weeks of editing. Seven days after turning in our final edit, Warner Bros. made an offer on the film rights.

Obviously social media is an important part of The Future of Us; how important do you think social media (i.e. Twitter/Facebook/blogging) is in today’s market for a writer?

JA: It’s a great way to get the word out about a new project or upcoming appearances, but readers aren’t going to know about those things unless they continue following you in those various outlets. That requires letting them into your world a little, so every author needs to find a comfortable balance between what’s public and what’s private.

CM: Jay is much better about being a presence on the social media circuit. I do think readers enjoy seeing what their favorite authors are up to on Facebook and Twitter, but I feel so conflicted about writing about my personal life, my husband and kids and daily dramas. Everything I have creatively, I pour into my novels. After that, I want to kick back on the couch and read a book or watch a movie.

Which authors do you think have most influenced your own individual writing styles?

CM: A whole mix of the YA authors I grew up reading, like Judy Blume and Lois Lowry, to the amazing array of contemporary authors such as Gabrielle Zevin, Megan McCafferty, David Levithan and – yes! – Jay.

JA: Carolyn’s style, and how she slowly reveals her powerful characters, was definitely an influence. Chris Crutcher’s brutal honesty also left a huge impact on me.

JA: Join a critique group. You’re not going to be in the same room as future readers (including agents and editors) when they open your work, so it’s very important to get feedback about how others read your words.

CM: Write what you’d most like to read. Read a lot. Rewrite a lot. Don’t be afraid to show your work to people. Get to know other aspiring and published writers.

CM: Teens should definitely have the freedom to read what they wish. It is our jobs, as authors, to tell the best stories we can tell. It is our job, as parents, to guide our children into forming opinions about what they read, knowing when they’re ready (or not ready) to read something, and deciding when they do and don’t agree with the characters’ actions.

JA: There’s almost no issue I could write about that hasn’t been dealt with by at least one person. Because of that, I don’t think there’s anything inappropriate to explore through writing. Especially in the teen years, people need to know that there are others who understand what they’re experiencing or what they’re feeling.

Thank you so much for your time. Before you go, could you tell me about any projects you have in the pipeline we can look out for?

JA: I’m working on several ideas right now, but I don’t know which one will be my next completed project.

CM: I’m just starting a new solo novel, but Jay and I both want to write another book together, too. It was such a creative and fun experience writing The Future of Us. We want an encore!

*
And there you have it, folks. Make sure to check out the next stop on the tour, where Jay and Carolyn will be visiting Gripped Into Books tomorrow!
Posted by CarlyB at 07:00