Here with me this afternoon is the lovely Marissa Meyer, author of debut 2012 novel, Cinder, which is the first in a brand spanking new series that I know we are all very excited about! 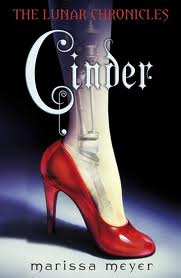 Happily Ever After: Why Fairy Tales Never Grow Old
By Marissa Meyer
There are only nine stories in the world.

Or… maybe it’s fifteen stories. Twenty-one? I can never remember.

But whatever the number, there’s a common believe that there aren’t very many stories in the world, and storytellers just continue to rehash the same plot arcs and themes over and over again:

The Little Mermaid = “Be careful what you wish for.” Even more appropriately, this is also a typical “fish out of water” tale.

This could go on and on, simmering every story, from the most basic to the most complex, down to its core and fitting it nicely into a specific slot.

To me, though, the most interesting part about the theory that there are only a handful of “stories” constantly being retold, is that it in no way limits what we can do with those stories.

Take “Cinderella,” for example. How many versions of Cinderella are there that use the expected fairy tale plot and yet still manage to be unique and entertaining? (The Disney movie, for example.)

Then there are Cinderella retellings that take it a step or two further. They might add an unusual curse (Ella Enchanted by Gail Carson Levine), or give her a new love interest (Ash by Malinda Lo), tell the tale from the villain’s point of view (Confessions of an Ugly Stepsister by Gregory Maguire), or set it in the future and make the heroine part-machine, like I do in my own Cinder.

There are takes on the story that go even farther, until it’s barely recognizable as Cinderella, even though the rags-to-riches theme remains—a la Pretty Woman featuring a prostitute as the heroine or Maid in Manhattan featuring, you know, a maid. In Manhattan.

And then there are mash-ups that put many different stories in a blender and see what happens—such as the Broadway musical “Into the Woods,” in which Cinderella’s prince is the brother of Rapunzel’s prince, among other twists, and also the recent television drama “Once Upon a Time,” in which Cinderella’s modern-day representation is a pregnant woman being hounded to give up her child by none other than Rumpelstiltskin.

Whew! All that, and so much more, from one simple story about a girl going to a ball and marrying a prince. And there will be many more riffs on Cinderella, and its fairy-tale counterparts, in the years to come. Because while it may be true that there are only a handful of underlying stories in the world, each writer and creator brings something entirely new to that theme. Something unexpected. Something fun.

And that’s why I think the recent fairy tale revival has captured so many hearts. The familiarity of the fairy tales has an element of nostalgia to it, but we know better than to expect the same old story again and again. We expect each new retelling to have something new to offer. And that excitement and curiosity about what else could be done with these tales, I feel, will continue to captivate our imaginations time and time again.

*
Marissa Meyer is the author of Cinder: Book One of the Lunar Chronicles. Follow her on Twitter (@marissa_meyer) or become a fan at facebook.com/lunarchronicles and facebook.com/marissameyerauthor.
Posted by CarlyB at 17:00