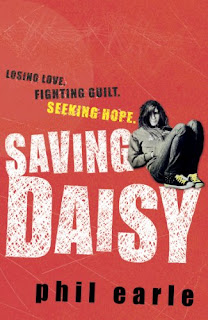 Daisy’s mum is gone. Her dad refuses to talk about it and as far as Daisy’s concerned, it’s all her fault…

Saving Daisy is a powerful and moving story that follows the life of Daisy Houghton who first featured in Phil Earle’s critically acclaimed debut, Being Billy.

As Daisy struggles with misplaced guilt over her mother’s death, she turns to extreme and violent measures and soon her life starts spiralling out of control. This leads to tragedy and suddenly Daisy finds herself left all alone. But sometimes the kindness of a stranger can turn things around. A stranger who desperately wants to save Daisy – if she’ll only let herself be saved.

My review: Being Billy was one of the first books I reviewed in 2011 and definitely one of my favourites. I waited patiently allllll through 2011 for Saving Daisy and I finally managed to get my hands on a copy just before Christmas. I loved Being Billy so much, so I had massively high expectations for Saving Daisy. Did it deliver? Abso-bloody-lutely.

We met Daisy in Being Billy so already know that she's a strong, funny, brave character when we follow her story in Saving Daisy. However, instead of picking up where Being Billy left of, we actually jump back to Daisy's life before the events in Being Billy take place. The Daisy we meet this time around is much more fragmented, nervous and guilt-ridden, a shadow of Billy's friend we already know and love. There are traces of her sparky personality and sense of humour but these are buried under years of blaming herself for her mother's death and a strained relationship with her father.

The journey Daisy embarks on is staggering and we see her grow and grow with every unthinkable challenge that is thrown at her. With the help of a cast of amazing characters (especially Ade, who I'm sure everybody is going to adore) Daisy goes from strength to strength as the ultimate proof that whatever doesn't kill you makes you stronger. Honestly, I think both Saving Daisy and Being Billy should be mandatory reading for anybody who thinks putting on a few pounds over Christmas or Twitter being down for a couple of hours is genuinely something to complain about - first world problems, eh?

Particularly towards the ending of the story I loved how a few events that happen in Being Billy are hinted at - sorry to be so vague but I don't want to post any spoilers in case any of you haven't read Being Billy. I'm actually interested to reread Being Billy now to see if there's anything new I pick up on now I know more of Daisy's story. It was definitely a very interesting idea for the stories to be revealed in this order, I found that learning about Daisy's past made her seem even stronger and more resilient than I first thought she was.

There are some brilliant characters in Saving Daisy who are definitely memorable, for both good and bad reasons. Ade, of course, as I mentioned earlier, is sure to be a favourite - I thought she was fantastic, so fully realised that I'm sure she must be at least partially based on a real person. Mr Hobson as well, is one I'm sure I'll remember for a long time to come - I certainly didn't see that coming! Naomi was the other character, aside from Daisy, who made me think the most and she reminded me a lot of Lisa R from Girl, Interrupted; cruel and tragic in equal measure.

Saving Daisy definitely makes you think and I defy any one of you who can make it through the book without welling up - I know I had a cheeky cry on more than one occasion!

First line: 'You can tell how good a party is by the time that the walls start sweating.' (One of my favourite opening lines ever and so bloody true!)

Read if you liked…: The Zelah Green series - Vanessa Curtis